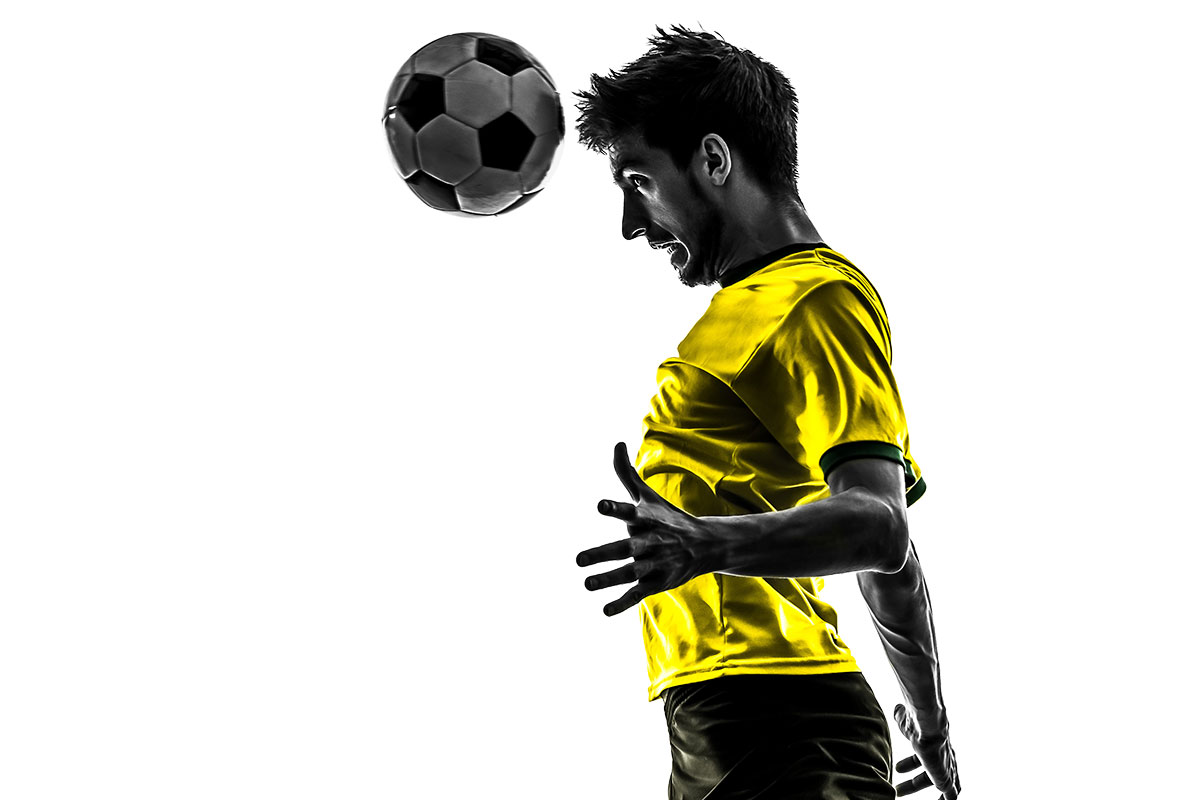 In recent news published in the Journal of Orthopaedic & Sports Physical Therapy, researchers who examined previous studies on concussion concluded that increasing neck strength “could substantially reduce risk or severity of injury or outcomes” (2019; 49 [3], 202–8).

“A concussion is when the head gets rattled like a little bobble doll,” says NASM Master Instructor Fabio Comana, MA, MS, NASM-CPT, CES, PES. “If I have strong muscles stabilizing the head, like when heading a soccer ball or during a collision, it doesn’t bobble as much.”

Cue the client with these moves: Sit upright and lower the chin to touch the chest, then tilt the head back (face nearly parallel to floor); bring the head back to neutral and turn once to each side (chin to collarbone). Clients who have pain with any of these motions should see a physical therapist or a physician.

Have the client stand with the back against a wall and pull the shoulder blades back so they are flat, opening up the chest. Now look at the person from the side. The mastoid process (the bone right behind the ear) should align directly over the acromion process (the bump at the end of the clavicle or shoulder blade).

“Many people have a forward-head position,” says Comana. If so, corrective exercise should be performed to restore balance in the postural muscles before moving on to strengthening.

A simple exercise Comana recommends is to tell the client to pretend you accidentally got dog poo on your hand—and then put your hand in front of the client’s nose. The person will instinctively pull back the head into proper alignment. “This [movement] should be done repeatedly throughout the day; not just once and done,” he adds. Comana has clients put a checkmark in a notepad every time they do this exercise between sessions. (Additional moves are detailed in the NASM Corrective Exercise Specialization program.)

Rather than doing “neck exercises,” which often don’t involve much range of motion, Comana suggests focusing on compound lifts that happen to build neck strength, such as the deadlift and shoulder press. As always, following the NASM OPT™ model, Comana recommends “unloaded then loaded then exploded” training. “Don’t progress clients unless they earn the right to progress,” he says.

Comana uses an app called Coach’s Eye to snap a picture of the client’s posture, even when in motion. “The app allows me to draw lines and show the angle of the head to the back,” he says. After a few weeks of corrective exercise, Comana can show clients their progress.

Summertime often means more people are in pursuit of the elusive “six-pack.” There are a few problems with that, says Mike Fantigrassi, NASM-CPT and Master Instructor. “One of the sayings is ‘Abs are made in the kitchen,’ and it’s really true. To see your abs, it boils down to nutrition. Clients need to know that.” Here are a few other things to keep in mind when helping clients target their abs:

Most people spend 15 minutes on abs, when they only need to devote 2 or 3. Also, they work the abs daily, which does not give muscles time to recover. Lower-intensity exercises—like planks—can be done daily or be used in a warmup or active recovery between exercise sets, but the protocol for ab work is 1–4 moves, 1–4 sets, 3 days a week.

Some ab exercises can worsen muscle imbalances. For example,
if hip flexors are tight from too much sitting, full situps will engage those muscles more than the abs. And clients whose hip flexors are already strong, such as cyclists, don’t need to strengthen them further.

As with any other move, consider what muscles you want to target. Many people focus too much on the rectus abdominis and the “lower abs,” which they try to target with leg levers and flutter kicks. Guide clients to include moves that target the internal and external obliques and transverse abdominis, as well.

If a client’s belly is puffing out during a crunching move, the client is not drawing the belly in. This drawing-in action has been shown to activate both local and global stabilization systems in the body. Also check for a forward-protruding head and cue for posture corrections.

Below is a progressive core-exercise program based on guidelines in the NASM Optimum Performance Training™ model:

NUTRITION CERTIFICATION FOR THE WIN

If abs are made in the kitchen, serve up results for your clients by becoming an NASM Certified Nutrition Coach. In this state-of-the-art interactive program, you’ll learn how to put your clients on the healthiest route toward their best selves.

WHY (AND HOW) TO PUT MORE “YOU” INTO YOUR BUSINESS

Danielle Gray, NASM-CPT, knows what it means to build a business around a personal passion. She began gymnastics when she was 4 years old, competed on the Junior Olympic team and later became a gymnastics coach. Today, her business—Train Like a Gymnast—centers on applying the lessons she learned to clients with all types of fitness interests and goals.

“Putting yourself into your business can equal success for many reasons,” she says. “When you’re in business, you need a niche. Many people are used to ‘fitting in’ because that means survival, but in the business world, you want to stand out. Otherwise you get lost.”

Though creating a niche business may narrow the types of clients you work with, Gray says the payoff in working with likeminded people is both personal and professional: She’s found that not only does she feel more connected to her clients, but her authenticity has created a level of trust that has increased client retention rates and referrals. Not everyone may have quite so obvious a niche as she did, but she says all fit pros can differentiate themselves from the pack by tapping into their truest selves.

“The first step is to think of how you train,” she says. “Why do you train the way you do? What do youlove about it? You’ll have passion there because it’s what you love to do. Spread that joy!”

WHO’S GOT A BIG HEAD?

Everyone! The average adult’s head weighs 10–12 pounds. “It’s a big ball, and the best place to balance it—the fulcrum—is over the C1 and C2 axis in the cervical spine. If the head is off balance, shifted forward just 30 degrees, like from 12 p.m. to 1 p.m. on the clock face, the head now weighs 40 pounds,” says NASM Master Instructor Fabio Comana. “That’s why a forward shift—as in upper crossed syndrome—can be very problematic.”

HOW MANY MINUTES OF DAILY EXERCISE WILL GET YOU TO AGE 90?

Two researchers from the Netherlands examined data from the Netherlands Cohort Study, specifically looking at 5,479 people born in 1916–1917. The study kept tabs on various factors, including physical activity, from age 20 until age 90 or death, whichever came first (1986–2007).

The results, published in the Journal of Epidemiology & Community Health, were different for women than for men. Men who exercised for 90 or more minutes a day were 39% more likely to reach age 90 than those doing less than a half-hour. For men, more exercise time meant better odds. For women, though, 60 minutes a day seemed to be the sweet spot for becoming a nonagenarian: Doing more or less was associated with a lower likelihood of reaching that milestone.

In research published this year in Neurology, Columbia University professor Yaakov Stern, PhD, et al. studied a group of 132 adult men and women (2019; 92 [9]). All were classified as “cognitively normal” and “below median aerobic capacity.”

Participants were divided between two training programs: One focused on aerobic exercise, and the other on stretching/toning. Both programs ran for 6 months, with workouts four times per week. Before and after the interventions, researchers measured a variety of factors, including cognitive function, aerobic capacity, body mass index and cortical thickness, which has been associated with higher general intelligence scores (Intelligence, 2013; 41 [5], 597–606).

All ages of aerobic exercisers showed improvements in cognition, which includes executive function, episodic memory, processing speed, language and attention. While the effect on executive function was more pronounced with age, the researchers noted in their conclusion, “Increased cortical thickness suggests that aerobic exercise contributes to brain health in individuals as young as age 20.”

For fitness professionals working to motivate college students, those who are GPA-focused could be interested in knowing they may perform better aca­demically if they don’t skip workouts to study. (Perhaps an hour less of Netflix would be a better tradeoff.)

Danielle Gray, NASM-CPT, from Train Like a Gymnast, shares a strategy from her own college days that may help keep students moving between training sessions: Enroll in a physical education class each semester. “I knew if I scheduled it into my courses, I would make time for it,” she says.

In the recently updated Physical Activity Guidelines for Americans (2018; 2nd ed.), published by the U.S. Department of Health and Human Services, Chapter 3 is dedicated to exercise for children and adolescents. As in the previous edition, guidelines are spelled out in terms of timing, intensity and duration. But a key component is not mentioned: the importance of establishing a foundation of healthy movement patterns, posture and exercise form, as recommended by the NASM Optimum Performance Training™ model.

How to adapt the model to kids? The NASM Youth Exercise Specialization (YES) course (1.0 NASM CEUs) offers guidelines not only on doing that but on adapting assessments, SAQ training and even motivational approaches—all of which are a bit different for children.

Here, for example, are the guidelines for resistance training:

GX NEWS: TURN YOUR GYM TRIBE INTO A ROWING CREW

Recently, Technogym®—an official supplier of seven Olympic Games—
reimagined indoor rowing machines and came up with SKILLROW™. This innovative machine can be used solo, of course, but Technogym also created a SKILLROWING class program that turns the activity into a unique group experience.

With the UNITY™ SELF SKILLROW app and kiosk, instructors select from a library of class profiles or create their own programs, adjusting elements such as power, heart rate or strokes per minute. (The program allows you to manage the microphone and music, too.) Class members simply follow the rowing pace of the trainer. They can get individual feedback or compete against each other, watching their progress by tracking real-time training data on a large screen at the front of the room. The SKILLROW machines can also be used for athletic training classes and athletic performance circuits.

“The growing passion for rowing, paired with our state-of-the art equipment and technology, makes adding a SKILLROW class a timely fit,” says Nerio Alessandri, CEO and founder of Technogym. “This class allows users to achieve their maximum potential by activating every muscle in the body.” To learn more, visit Technogym.com.

Working with competition athletes who have been sidelined by an injury can be tough. Psychologically, a certified trainer can help them avoid negative thinking and remind them to focus on the goals their doctor suggests now. Physically, it’s more complicated: “During this time, it is important the sports performance professional not lose focus on maintaining the uninjured areas of the athlete. Doing so can lead to dysfunction and the potential for injury to those adjacent body parts,” according to NASM Essentials of Sports Performance Training (Jones & Bartlett Learning 2019).

To make this transition as safe as possible, the Performance Enhancement Specialization offers protocols to help you know when it’s safe to work the traumatized area and what to avoid when you do. Also, the fitness pro must work in close concert with the athlete’s sports medicine staff to ensure that training coordinates with treatment. Here’s a summary of the stages:

The sports performance professional only works on the nontraumatized muscles using isolateral or single-limb training.

After the athlete regains pain-free range of motion in the traumatized area (and receives medical clearance), progressive strength training can begin (with little stress on joints).

The focus changes to returning the athlete to baseline (or better). Strength exercises continue, and metabolic conditioning begins.

The injury-recovery process is complete when all of these apply: