WHAT IS THE MEDITERRANEAN DIET AND COULD IT WORK FOR YOU?: 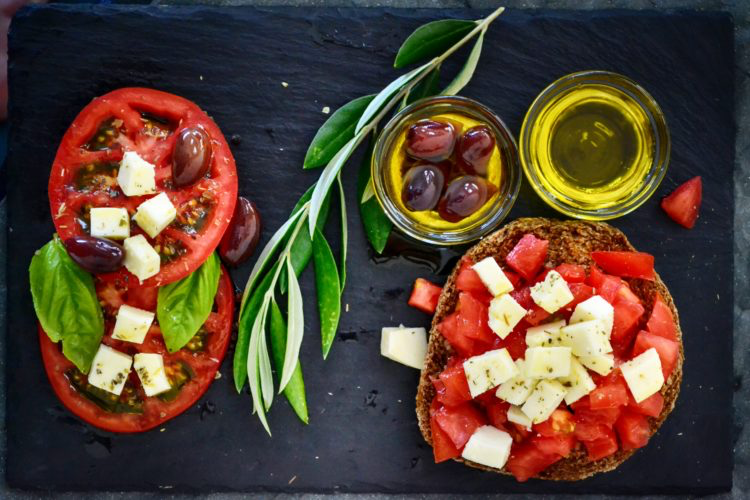 WHAT IS THE MEDITERRANEAN DIET?

The Mediterranean diet was originally conceived based on observations of the good health experienced by populations living by the Mediterranean (predominantly Greece, Italy, Spain).

One of the good things about the Mediterranean diet is that there is no one single nutrient profile, so there is great flexibility for the consumer.

Restrictions or recommendations are not based on macronutrients, but rather through food-based recommendations. This likely makes it easy to implement for a large number of people without the requirement to.

However, in a relatively recent review of literature aimed to define what the approach looks like, Davis et al. (2015) found that the Mediterranean diet typically contained daily servings of:

From the studies examined, on average the Mediterranean Diet has 37% of the daily calories coming from dietary fat. Of the fat intake, on average 18% was monounsaturated and 9% was saturated fat.

The diets followed in these studies also provided about 33 g of fiber per day. These figures fit well within typical evidence-based guidelines for a healthy diet, namely: to have a high fiber intake and prioritize monounsaturated fat over saturated fat.

However, it is important to note that the Mediterranean diet extends beyond simply food choices, as it also accounts for social and cultural aspects, which are well known to influence long-term health.

For example, the approach traditionally emphasized communal mealtimes, resting after eating, and regular physical activity (Renzella et al., 2018). All of these behaviours may have impacts on health independently of the nutritive value of the food.

The Mediterranean diet is one of the most extensively studied dietary approaches in the world. So what does the evidence say about its ability to impact health and body composition?

HEALTH BENEFITS OF THE MEDITERRANEAN DIET

When it comes to impacts on health reported in scientific research, the Mediterranean Diet looks like a real winner. There is perhaps no other dietary approach with the consistency of strongly positive health outcomes.

The Mediterranean Diet has evidence to support its role in:

However, a recent meta-analysis has suggested that there is “inconsistent, minimal, or no evidence” that the Mediterranean Diet holds an advantage over other diets for hypertension, cognitive function, kidney disease, rheumatoid arthritis, and quality of life (Bloomfield et al., 2016).

A meta-analysis of trials looking at the diet’s impact on weight loss found that the Mediterranean diet did do better than control diets for weight loss (Eposito et al., 2011).

Unsurprisingly, weight loss was greater when the dietary approach was intentionally combined with caloric restriction, increased physical activity, and a follow-up of longer than six months.

These may not be true “downsides” to the Mediterranean Diet, but rather some reasons why it may not be a good fit for some individuals’ specific context.

First, if an individual’s food preferences are completely at odds with the main groups of food that the diet is built on, then it may be too difficult to adhere to in the long-term.

Second, for those with specific goals of losing body fat, there are not in-built caloric restrictions on the diet.

So whilst many will naturally eat less on the diet and lose weight, for some people to make progress they may need to either combine a Mediterranean diet with quantifying their caloric intake, or use a strategy that is more readily focused on restricting total energy.

SHOULD YOU ADOPT A MEDITERRANEAN DIET?

So should you eat a Mediterranean diet? If you can see yourself sustaining an approach like this long-term, then go for it! There are many benefits to the diet and it is built on nutrient-dense foods. However, if this type of strategy sounds wholly unappealing to you, there are many other types of healthy diet patterns that you can adopt to be healthy that might be a better fit for you.