WHAT IS PELVIC TILT & HOW DO YOU FIX IT?: If you’ve worked out with a personal trainer or in a group fitness class, you may have heard the term ‘pelvic tilt’. A fitness professional may have even told you that you have a pelvic tilt, but what does that mean?

Many people may be unfamiliar with this term despite its prevalence in society. In this article, you’ll learn what a pelvic tilt is, how it can impact back health, and what to do if you do have a pelvic tilt.

WHAT IS PELVIC TILT?

Your pelvis is the bone structure that makes up your hips. Pelvic tilt describes the motion that happens when the pelvis tilts forward or backward. A pelvic tilt in and of itself is not a bad thing. The pelvis is designed to tilt forward and backward to help you perform everyday movements. A pelvic tilt only becomes problematic if your body stays in that position for an extended period.

So, how would that happen? In the body, muscles help to move the bones (the bones won’t just get up and walk away on their own, thankfully). When muscles stay in one position for too long regularly, they can adapt to the position by shortening or lengthening. This change of length in the muscles can change their ability to move the bones in their normal range of motion at the impacted joints.

When it comes to the muscles surrounding the pelvis, time spent seated is the number one culprit for altered muscle length and faulty movement.

According to the American Heart Association, over 80% of all US jobs are predominantly sedentary. Sedentary jobs have increased 83% since 1950 – likely due to the increased use of technology in the workplace. Most of us spend additional time seated during our commute, while we eat, and during non-work hours as we relax in front of the TV.

Think about how you feel after working at the computer for an extended time, or after a TV series binge-watch. When you get up, you likely feel tight, maybe a little bit stiff, and maybe a little bit achy. This is because your muscles have adapted to a seated (or lounging) position, and they need a little bit of help returning to their normal length.

Sitting for too long occasionally isn’t too problematic and it won’t seriously impact your overall movement. If you sit for an extended period on a regular basis, your muscles will adapt to this position and change the way that they pull on the pelvis, femur, and spine, which can lead to some pain and discomfort in the low back.

Did you know that pelvic tilt can be caused by overactive and underactive muscles?

In a posterior pelvic tilt, your pelvis is tilted toward your backside as if you had your tail tucked, so to speak. To understand what I mean, stand and put your hands on your hips. Pretend that you have your hands on a bucket of water (with your pelvis being the imaginary bucket). Now, try to pour the water in your imaginary bucket out behind you without leaning back. To do this, you will have to tilt the pelvis back, almost like you’re tucking your tail. This is called a posterior pelvic tilt.

An easy way to see if you have a posterior tilt is to put on a pair of your jeans with a belt and your shirt tucked in so that you can see the belt. Stand as you normally do while looking at yourself in a mirror from a side-view. With a posterior pelvic tilt, your belt buckle will be higher than the back of the belt when viewed from the side so that you can see both at the same time. In a squat, you can see a posterior pelvic tilt if the hips tuck under at the bottom of the range of motion. This is commonly known as a “butt wink”.

Using the same bucket demonstration, an anterior pelvic tilt occurs when you try to pour the water out in front of you without leaning forward. This move will cause an arch in the low back, and it will look like you’re trying to stick your rear end out.

IS PELVIC TILT BAD FOR THE LOWER BACK? – PEOPLE ALSO ASK

In an ideal standing posture, your pelvis will rest in neutral so that if it were a bucket of water, no water would spill out at all. The muscle groups that are connected to the pelvis will also influence the movement and static position of the spine. If your muscles are pulling your pelvis into an anterior or posterior tilt regularly, it can cause some low back discomfort over time.

HOW DO YOU FIX PELVIC TILT?

Do you have a pelvic tilt? Never fear! You don’t have to stay stuck in this position forever. As I explained earlier, the main cause of a pelvic tilt is the shortening and lengthening of the muscles that are connected to the pelvis.

The good news is that you can do some targeted stretching and strengthening exercises for the affected muscles to reverse the pelvic tilt and return to neutral. To fix a pelvic tilt, we want to foam roll and stretch the shortened muscles and then strengthen the lengthened muscles.

Here are some targeted exercises that you can do to help correct each type of pelvic tilt:

Foam roll: Sit on top of the foam roller starting just below the glutes and slowly roll toward the knee. When you find a point of tension, hold still for 30 seconds up to 2 minutes. You should feel the area start to relax. You can roll both legs at once, or focus on one leg at a time.

Stretch: Sit up tall on the front edge of a chair with one leg bent and the other leg extended with the toes up. Keep your back flat as you slowly lean forward until you feel a stretch in the back of the straight leg. When you begin to feel the stretch, hold it there for 30 seconds to 1 minute. Switch legs.

2. Strengthen: Erector spinae (the muscles that run alongside the spine)
Do 12-15 reps of each, 1-3 sets

Floor Cobra:
• Starting position: Lie down face down with feet hip width apart, toes pointed, palms facing the ground, and with your face hovering over your mat (not touching). Squeeze the glutes and keep them tight during the movement.

• Lift the arms off of the mat and turn the thumbs up toward the ceiling, opening the chest. Your chest will lift slightly, but avoid overarching your back. Keep your chin tucked and your head in alignment with your back.

Foam roll hip flexors: Lie down face down on the foam roller with the roller placed on the top of the quad. Slowly roll up toward the hip, avoiding any areas that cause numbness or tingling. When you find a point of tension, hold still for 30 seconds up to 2 minutes. You should feel the area start to relax. Switch sides and repeat on the other side.

Foam roll lats: Lie down on your side with your arm extended and the foam roller just behind your armpit. Roll down toward the ribcage only a couple of inches (to avoid damaging a rib), and then roll back up toward the starting position. When you find a point of tension, hold still for 30 seconds up to 2 minutes. You should feel the area start to relax. Switch sides and repeat on the other side. 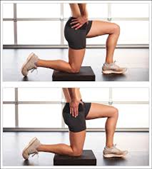 Hip flexor stretch: Place one knee directly underneath the hip and the other leg bent in front of you at 90-degrees. Squeeze the glutes as you tuck your hips under, focusing on the kneeling side. You should feel a stretch on the front of the hip and thigh of the stretching leg. You can tuck your toes under on the back foot for a deeper quad stretch. Hold the stretch for 30 seconds to 1 minute and then switch sides.

Lat stretch: Place arms on your foam roller with the thumbs pointed up. Press your chest down toward the ground and keep the hips tucked under to feel the stretch in the lats. Hold the stretch for 30 seconds to 1 minute. You can also stretch one side at a time if that’s more comfortable. 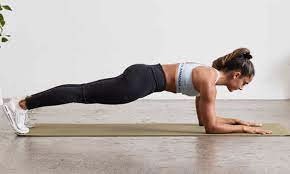 • Starting position: Line your elbows up under your shoulders, feet hip width apart, and toes tucked under.

• You can plank on an elevated surface, like a bench or countertop, of planking on the floor feels too challenging.

Bridge with a band

• Starting position: Place a medium resistance band just above the knees. Lay on your back with your knees bent, feet hip width apart, and palms up as your arms rest at your sides.

• Squeeze the glutes and keep tension on the band (keeping your knees hip width- don’t let them cave in) as you raise your hips up. Raise the hips until your shoulders, hips, and knees are in a straight line.

• Squeeze the glutes as tightly as you can, keeping the hips tucked under, and hold the top position for 2 seconds before slowly lowering down. When your hips barely touch the ground, raise up again into your next rep.

• Make sure your back doesn’t arch at the top of the bridge.

Hamstring curl with a ball

• Starting position: Lay on your back with your legs straight and your calves or ankles on top of the ball. Rest your arms next to you so that they can help you with balance. The farther away from your body the ball is, the harder the movement will be. Start easier, like on the calves, and then scoot the ball away to increase the challenge if needed.

• Squeeze the glutes and abs as you raise your hips up toward the ceiling. Keep your hips lifted as you roll the ball toward your glutes, hold for 2 seconds, and slowly return to the starting position.

• Note: If doing this exercise with your hips raised is too intense, try it with your hips down. Start with the legs straight and press your heels down into the ball as you roll the ball toward you in a fluid motion. You should still feel the hamstrings working.

Perform your pelvic tilt protocol 2-4 times a week, and/or before each workout for best results. After a few weeks of consistent stretching and strengthening, you should notice a reduction in any low back pain that was caused by the pelvic tilt.