WHAT DO FOAM ROLLERS DO?: 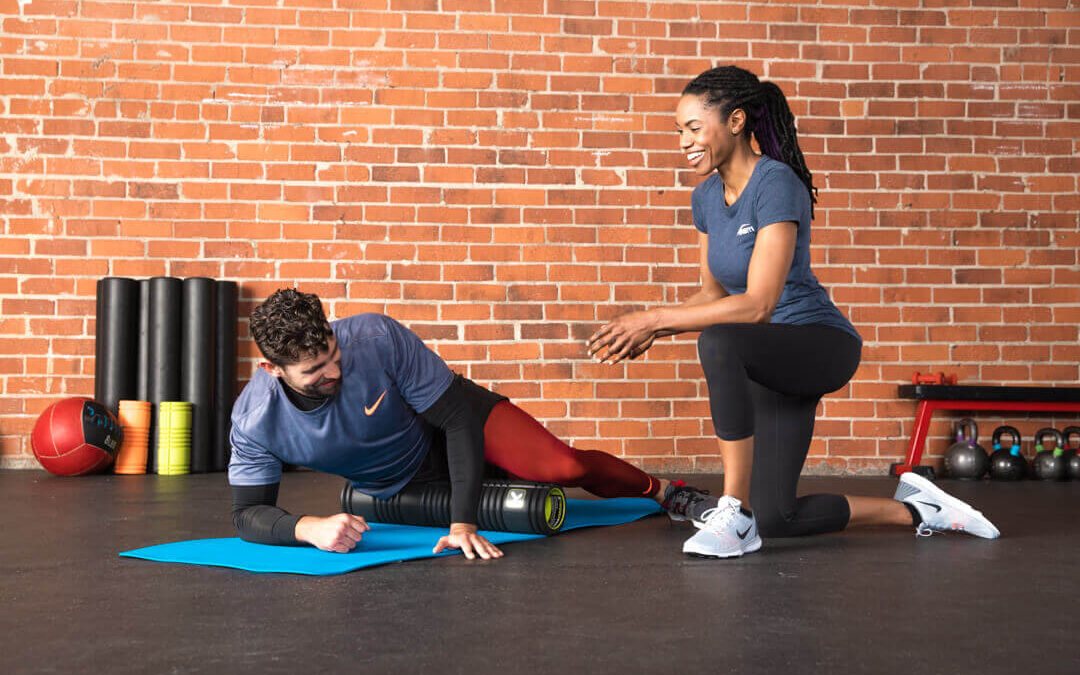 In the last decade, the use of foam rolling has become increasingly popular for athletes and average Joes alike. Foam rolling as a corrective exercise method makes sense – they feel “good,” seem to work well, have an excellent cost to benefit ratio, and are easy to use (give anyone a roller, and they soon figure out that it is made for rolling). In the seem to work well category, one systematic review stated that foam rolling might be a useful technique for improving joint range of motion and pre- and post-exercise performance (Cheatham, Kolber, Cain, & Lee, 2015). Another meta-analysis concluded by stating that pre-rolling is an effective strategy for short-term improvements without decreasing muscle performance (Wiewelhove et al., 2019).

WHY DOES FOAM ROLLING WORK?

The benefits of foam rolling are well studied. A general PubMed search of “foam rolling” returns 100 studies within the past five years. However, even with all this attention, we still don’t fully understand why exactly why foam rolling works. Many believe that the roller is used to “release” fascia, relax and lengthen muscles, or even activate muscles. Further, others maintain that rolling helps to relax the nervous system or, perhaps to activate the nervous system. The conflicting viewpoints leave many others confused about what rolling is doing. However, like good humans, people keep rolling simply because everyone else is rolling. This article is going to touch on a few of the most common reasons given for why rolling may be an effective flexibility modality.

Maybe. Research involving the nervous system has shown a positive effect. NASM was one of the first organizations to position the foam roller as a tool that, when used appropriately, may increase parasympathetic control resulting in an overall decrease in vagal tone (Clark & Corn, 2001). Behm and Wilke (2019) stated that the pressure exerted by a roller through the activation of fascial mechanoreceptors and type III and IV interstitial afferents that help regulate the nervous system might influence myofascial tone. Type III and IV receptors are thought to activate during the mechanical manipulation of tissue (Schleip, 2003). Schleip further suggested that these receptors may also be associated with rapid changes in nervous system function, such as changes in heart rate and blood pressure. Thus, the current thought is that slow, sustained pressure may increase parasympathetic control (i.e., relaxation response). However, the reverse may be true, causing increased sympathetic control (i.e., excitatory response) during rapid and vigorous rolling.

As a side note, Cheatham and Stull (2018) found that foam rolling may produce a global effect as tissue pressure to one side of the body can positively impact the contralateral side. In Cheatham et al. ‘s study, participants rolled their left leg and experienced positive benefits (increased range of motion and decreased pain) in both legs. These findings suggest that the nervous system is affected, one way or another, by foam rolling.

It is worth noting that positively affecting the nervous system brings into question the density of the roller. It is often thought that “harder is better” as it means more layers of tissue are manipulated. However, this does not appear to be the case. In a recent study, Cheatham and Stull (2018) found that a medium density roller seemed to yield the best improvement in range of motion. Regarding the nervous system, this makes sense as a denser roller may cause the user to tense up or stiffen against the pressure. Thus, when someone is just beginning rolling, start with a soft roller. Over time, as the person becomes more accustomed to rolling, a denser roller may be used. Always remember, pain is NEVER the goal of foam rolling. If too much pain or discomfort is experienced, it is almost a guarantee that the user will have a negative response.

Lastly, there may be a compounding effect to this nervous system question. Diaphragmatic breathing can engage the parasympathetic nervous system. Further, slow deep breathing while stretching reduces tension, pain, and leads to improved flexibility (Wongwilairat et al., 2018). Thus, it would stand to reason that practicing slow deep breathing and relaxing while rolling may improve the response and the overall effectiveness of foam rolling.

Maybe. It makes sense that the mechanic pressure applied by the roller would encourage tissue mobility. Behm and Wilke (2019) noted that foam rolling might indeed reduce myofascial restrictions. Reducing facial restrictions is likely to involve the direct pressure exerted on the tissue by the roller. Muscles should slide past one another in a frictionless environment. Postural stress and emotional duress may create an environment in which muscles, fascia, and other tissues are not moving as much as they should. Over time, the body has the unique ability to lay down additional fibers between these otherwise mobile tissues. One day or even one week of poor posture may not have a lasting impact. However, months, years, or even decades may have a semi-permanent effect by thickening these tiny fibers. Rolling applied over time, many weeks, or even months, may be able to help reduce or eliminate these additional fibers (i.e., knots/adhesions). However, in an effort of prevention, regular rolling should be used to maintain movement between these surfaces, thus reducing the development of knots and adhesions in the first place.

Maybe. Although, it is crucial to recognize that no one has proven this with a foam roller. What does “releasing” fascia even mean? Myofascial release is hands-on therapy that has been practiced for many years. Barnes (1990) defined myofascial release as the practice of finding a restriction in tissue, applying a low-level tractioning force, and holding until you feel a release. Barnes continued that this may take up to 90 to 120-seconds. A few vital points to understand. First, Barnes is referring to skilled and licensed manual therapists that are searching the tissue for restrictions. The foam roller is not skilled or licensed, thus must rely on the user’s sensations to identify this facial “restriction.” Like it or not, we are terrible judges of what is happening under the surface of our skin. Second, the traction force Barnes is referring to involves a therapist applying downward pressure, into the tissue, and simultaneously apply force in opposite directions (think of pressing a newspaper down to a table and trying to pull it apart). Foam rollers, no matter how advanced, cannot combine these actions. So then, we must ask, are we really “releasing” fascia? This begs an additional question, if we are not releasing fascia, then why do we call it self-myofascial release? While this term has been used in the literature for many years, Cheatham and Stull (2018) have recently proposed a name change – roller massage. Or, an additional alternative may be self-myofascial rolling.

Now that you know this information, here are a few steps to ensure your rolling practices are yielding the desired return.

1. CHOOSE A SOFT ROLLER FOR THE FIRST FEW SESSIONS

As noted above, do not induce too much discomfort. Begin easy and slowly progress over time (this may be weeks or months).

A general recommendation is 1″ per second. A slow roll will help to identify tender spots (may or may not be “restrictions”) and prevent the overexcitation of pain receptors.

If a tender spot (~5 or 6 out of 10) is found, stop and hold pressure for 30 to 60 seconds. While maintaining pressure, concentrate on breathing and relaxing the muscle. This will help engage the parasympathetic system and encourage tissue relaxation, assisting in the maximum range of motion improvements.

After 30 to 60 seconds or a reduction in tenderness is felt, add active movements, such as flexion/extension, to take advantage of the local mechanical effect. Performing active motions has shown to be more effective than rolling alone (Cheatham & Stull, 2018; Cheatham, Stull, Batts, Ambler-Wright, 2019). For example, after holding pressure on a tender spot on the quadriceps, perform 4 to 6 knee flexion movements. This movement will pull the tissue through the force of the roller, sort of like wringing out a towel.

Experts recommend steps three and four in all cases of overactive and short tissues. However, slow-rolling back-and-forth along the length of the muscle is better than nothing. If a client finds that holding pressure and performing new movements is too advanced or confusing, have them slowly roll while concentrating on breathing and trying to relax. No matter the technique, try to spend ~90 to 120 seconds on each muscle group.

To conclude, there is still much to learn about foam rolling. However, based on the current knowledge, it is likely that foam rolling helps to free up knots and adhesions that may have formed between the tissue. Moreover, if used correctly (e.g., slow-rolling, breathing, and relaxing on a comfortable roller), it is also likely that foam rolling helps relax the nervous system. Together, both mechanical and neurophysiological components help to improve how each client moves.