THE SECOND SCOOP ON PROTEIN: WHEN, WHAT AND HOW MUCH?: 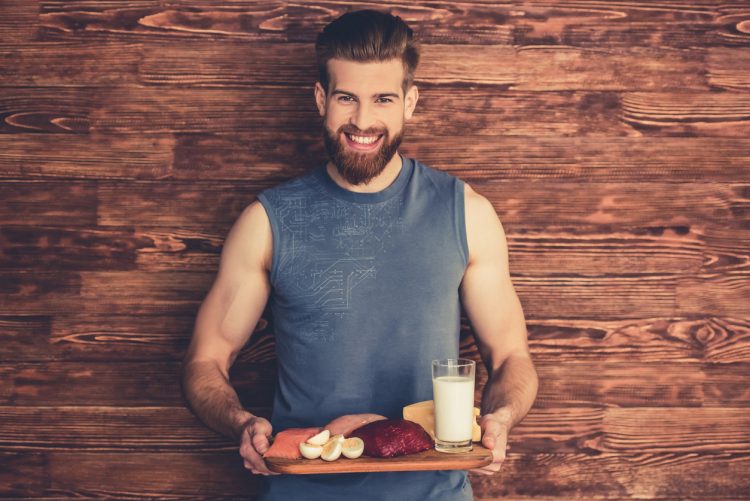 Drinking a protein shake after resistance-training is a popular nutritional strategy adopted by many fitness enthusiasts and athletes to boost muscle protein synthesis (MPS), but does evidence support this practice, and if so, then what type of protein is best, how much should be ingested and when should it be consumed?

The current recommended daily allowance (RDA) for protein intake for healthy adults is 0.8 g grams per kilogram (0.36 grams per pound) of bodyweight per day (1). That would calculate to approximately 64 grams of protein a day for a 176-pound (80 Kg) person (176 x 0.36). This protein RDA however is considered insufficient to meet all the needs of resistance-training or even endurance-trained individuals (2,3). Subsequently, a consensus from most credible health, fitness and nutritional organizations exists that states that athletic individuals do require greater quantities of protein in their diet than do their sedentary counterparts to support MPS.

A common misconception with exercisers is that ingesting more protein supports greater levels of MPS, but the latest position statements from the Academy of Nutrition and Dietetics (AND), Dietitians of Canada (DC), the American College of Sports Medicine (ACSM), the National Strength and Conditioning Association (NSCA) and the International Society of Sports Nutrition (ISSN) dispute this belief. They have each provided recommended dosages for endurance and resistance-trained individuals, as well as upper thresholds for protein intake (1,4,5). The notion behind establishing an upper threshold is based upon research that fails to demonstrate increased levels of MPS when eating more protein (i.e., exceeding the daily total or suggested amount in one meal because it (a) not be fully absorbed or (b) may not be utilized for MPS by the body). Although these position statements do differ slightly between agencies, a consensus is presented below as a guideline for practitioners:

* A traditional dosage often used by individuals is 1 gram per pound of body weight or 2.2 grams per kilogram, a dosage that is about 10% higher than the upper threshold recommended.

However, it is also important to recognize that studies do exist that have examined higher protein intakes in experienced bodybuilders and resistance-trained individuals who consumed high protein diets (up to 2.8 grams per kilogram or 1.27 grams per pound). These individuals continued to demonstrate MPS without any health concerns such as compromised renal function (6).

WHEN TO CONSUME PROTEIN?

Another discussion pertains to the quantity of protein that should be consumed within one meal or one sitting. Protein absorptive rates vary tremendously between people and between protein sources. Although males generally have a larger gastrointestinal (GI) tract, thus can absorb more protein than females, the reality is that it is very difficult to accurately determine this quantity given the myriad of factors that influence protein digestion and absorption rates which include (7):

A study by Symons and colleagues (8) compared 30 grams of protein versus 90 grams of MPS in young and elderly groups. Their research demonstrated that ingestion of more than 30 grams in a single meal did not further enhance the stimulation of MPS in both populations examined. This value echoes much of the sentiment of other researchers who estimate that between 20 and 30 grams represent an ideal protein quantity that can be efficiently absorbed in one sitting (9-11). Dosages, therefore, of approximately 20 grams for women and 25 to 30 grams for men in one sitting appear ideal, subsequently necessitating multiple feedings throughout the day to reach the desired total.

Regardless, what appears to be garnering much interest in MPS research is the quantity of leucine consumed (12,13). Amino acid metabolism into skeletal muscle is generally limited to six amino acids (glutamate, aspartate, asparagine, BCAAs – leucine, isoleucine, and valine), but the most significant effects are tied to leucine which acts as a critical regulator of MPS (e.g., m-Tor pathway), complementing insulin’s signaling effects and the production of other amino acids in muscle development (think of leucine as the engine or switch to drive MPS). Current consensus appears to agree that a minimum dose of around 2 to 2.5 grams of leucine is needed per feeding to signal the mTOR pathways that there is adequate dietary protein present to support MPS (14).

Protein timing is critical to enhancing MPS and muscle recovery. Although it has demonstrated that pre- and post-exercise protein ingestion results in increased rates of MPS in comparison to morning- and evening-feeding (15), differences between pre-exercise and post-exercise remain less clear. Tipton and colleagues fed active individuals an amino-acid-carbohydrate beverage containing 6 grams of essential amino acids (EAA)* and 35 grams of a high-glycemic carbohydrates (EAA-CHO) 60 minutes before high-intensity resistance training (80% of 1 RM) and within 30 to 45 minutes following that same workout. The study revealed that the net MPS associated with pre-exercise protein intake was greater than protein consumed after exercise (16). However, this finding was not replicated in a study by Schoenfeld and colleagues who found no differences between pre- and post-exercise ingestion of 25 grams of protein (17). Although this study also concluded that the optimal post-exercise anabolic window for maximizing MPS is also not as small as once believed (i.e., 2-3 hours post-exercise), but rather extends for 5 to 6 hours, other studies do not support this same finding, and recommend protein intakes within the first hour post-exercise (18).

An applicable takeaway for practitioners may be one where a dose up to 20 to 25 grams of protein is consumed within the hour before exercise and then consumed again within the first-hour post-exercise. The consensus of research on protein consumption in the post-exercise window is a dose of 20 grams, but this amount can be more specifically calculated using a dosing range of between 0.25 to 0.3 grams per kilogram (0.11 to 0.14 grams/pound) (11, 19). For example, a 176-pound (80 Kg) individual would aim for a protein intake between 20 and 24 grams of protein.

WHAT TYPE OF PROTEIN?

A previous article reviewed key differences between quality and the absorbability of plant- versus animal-based proteins, and between proteins within each food category. The most important outcome of protein consumed either before or immediately following exercise is rapid delivery to the muscles cells – ‘fast’ proteins deliver amino acids to the muscles more efficiently. Whereas casein can take hours to empty from the stomach, whey isolates can enter the blood within 15 to 20 minutes. Subsequently, individuals would be best served by consuming a fast protein like a whey isolate before and/or after their workout. But, because protein should also be consumed several hours later (e.g., 3-4 hours), an alternate strategy post-exercise is to consume a blend of both fast and slow proteins for the sake of convenience considering how some individuals may not have the inclination or ability to eat again several hours after their workout. Whether the inclusion of a slow protein with a fast protein (i.e., blended protein) impedes immediate MPS is largely unknown. Regardless, protein intake throughout the day should ideally follow a regimen of frequent, smaller protein dosages to sustain a more positive nitrogen balance (i.e., preserving muscle mass rather than breaking it down). Preferably, this entails a practice of ingesting quality protein every few hours (e.g., 3-4 hours) and complemented by the ingestion of a ‘slow’ protein like casein before bed to help reduce the catabolic state the body experiences during an overnight fast.

In closing, although post-exercise protein shake consumption remains a viable and effective practice, practitioners can develop and implement a few evidence-based strategies to optimize the outcomes associated with the practice of consuming additional protein.