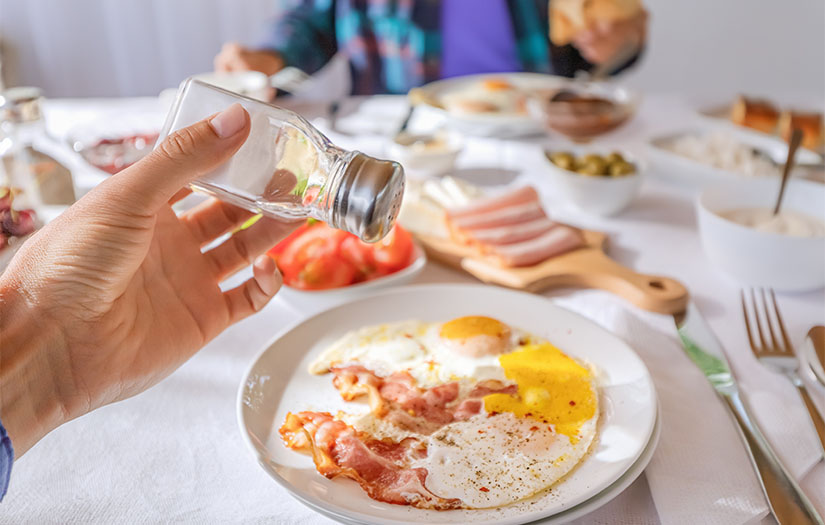 Sodium intake seems to be somewhat of an issue here in America. Even national dietary guidelines for Americans urge dietary habits that would inevitably decrease total intakes such as minimizing intake of processed meats and dairy products (1). Why the push to lower sodium intake? Why is it such an issue, and are you someone who should start cutting back on salt?Read below for tips on how to manage our sodium intake and see why salt really isn’t that bad.

For starters, sodium is a major electrolyte that regulates fluid balance within the body. Since water is attracted to sodium, sodium intake is a major contributor to blood pressure. According to the World Health Organization, excess sodium consumption is defined as >5g per day. Intakes this high have been shown to produce significant increases in blood pressure, provoking changes in vascular resistance, inducing inflammation, and significantly increasing the risk for cardiovascular issues. The current daily recommendation for sodium intake set forth by the Dietary Guidelines for Americans is 2300mg/day. It has been documented that around the world, most populations consume on average 3-6g/day. So, most of the world, not just America, consumes more sodium than recommended… Is this a problem?Well, current literature states that it depends. Generally, it has been documented that intakes that exceed 5g/day put you at the greatest risk for cardiovascular disease and complications. However, many other factors need to be considered. To begin with, physical activity and sweat rates must be considered. Individuals in an athletic population, or individuals that perform physically demanding work outside, may need to consume more sodium due to major losses in sweat. Sodium is a major component of optimal hydration. Some elite-level athletes may need upwards of 8g/day just to stay hydrated. But if you don’t fall into either of those categories, what are simple ways to know if you should cut back on sodium?

How to Cut Back on Salt

Okay, so now you’re looking for simple ways to cut back on sodium or just minimize your intake. What are some easy changes you can make right now to your diet to make that happen? Well, first you need to be aware of all the secret places sodium can be hiding.

The more obvious places would be frozen products or soups. However, there is a lot of sodium in these products as well!

We are not saying you need to eliminate all these sources of sodium from your diet. However, making simple changes like choosing fresh foods over frozen/canned; consuming less processed meats and fast food, and opting for water over soda or electrolyte drinks can be really easy ways to lower your total salt intake in a day.

How Much Salt is Too Much Salt?

Want an even more specific guide? Read the back of food labels! If a single serving of the food you are choosing is greater than 20% Daily Value in sodium, that is an indication it is much too high. Ideally, a single serving of any product you choose should have less than 140mg per serving.

Lowering sodium intake can have many benefits, even for normotensive individuals! The biggest benefit? Improving blood pressure and cardiovascular health! One meta-analysis showed that modestly reducing sodium intake for 4 weeks significantly dropped blood pressure in both hypertensive and normotensive individuals regardless of sex or ethnic group (2).

However, going too low sodium is not necessarily the best for you either… As aforementioned, sodium is a major electrolyte in the body. In fact, sodium stores are very tightly regulated. In cases where sodium intake is too low for chronic periods, it can disrupt many physiologic and metabolic processes — having the most damaging effect on cardiovascular systems.

The takeaway? Don’t consume too much sodium, but also consume enough every day! According to the literature, 4g/day is the sweet spot! 3-5g/day is a safe range. Below 3g/day is too low, and above 5g/day is too high (3).

Are there easy ways to lower salt quickly? Absolutely! Hop in a sauna, or on a treadmill and get moving! The fastest way to lower total body salt content is too sweat. But remember, sodium content in the body is tightly controlled for optimal regulation and will change day to day based on your diet.If you’re looking for quick solutions though, the best way is to minimize sodium in the diet for a few days (perhaps half your normal intake), drink plenty of fluids, and as mentioned previously… sweat!

Well, it’s a complicated process. The system responsible for regulating fluid and sodium excretion/absorption is in the kidneys. This system is tightly regulated to manage blood pressure and ensure the body maintains a very specific sodium balance.When blood volume or sodium concentration gets too high, the body gets triggered to excrete more sodium through the kidneys (so yes, consuming more fluids to help you urinate would be helpful in this case). In contrast, when blood volume is too low or sodium concentration becomes too low, the kidneys are triggered to reabsorb sodium.To recap, it seems that past recommendations may not hold true based on current literature. Many people who have been told they consume too much sodium, might be consuming within optimal limits. However, every person is an individual case. If you are someone who suffers from medical complications or even just looking to lower your intake because you consistently feel “swollen” the best takeaways are too:

Making these small changes can quickly lower your sodium intake and help you feel better all around!