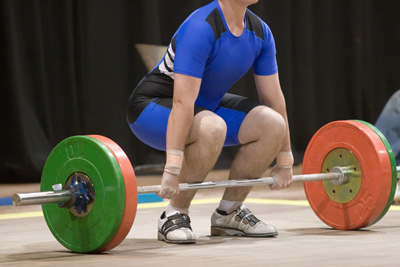 Olympic lifts and their variations have long been used as a strengthening technique to enhance sports performance.

Olympic weightlifting is technically a sport in which competitions are held locally, nationally, internationally and most notably at the Olympics. The competition lifts are the snatch and the clean & jerk. While Olympic weightlifting is a sport, the lifts themselves are commonly used by sports performance professionals to help their athletes improve elements of athletic performance such as strength and power. Furthermore, even more, popular among athletes and strength coaches are the variations of the competition lifts such as the power snatch and power clean (5). Variation lifts are more widely used because many athletes cannot achieve the deep squat position necessary of the snatch and clean & jerk (5,6). The power clean and power snatch are preferred because the catch position (receiving position) is performed from a 1/4 squat rather than a full squat position. Pulling derivatives such as the clean pull and snatch pull may also be preferred because the emphasis on triple extension (ankle plantarflexion, knee extension, and hip extension) and explosiveness is still stressed, but these lifts do not require the athlete to learn the intricacies of the catch position (6). To learn more about performing and properly assessing if athletes are functionally capable to perform Olympic lifts safely and efficiently see NASM’s Performance Enhancement Specialization.

When designing a program for enhancing sports performance, one of the most important acute variables sport performance professionals must consider is exercise selection (5). All exercises chosen, should follow the Principle of Specificity also known as the SAID Principle (Specific Adaptation to Imposed Demands). The SAID Principle essentially means the body will adapt to the type of demands placed on it. For example, if an athlete continuously lifts heavy loads, the adaptation will be maximal strength. Conversely, if the athlete continuously lifts light loads with high repetitions, the outcome will be muscular endurance. This is a fairly simple concept to understand. In essence, you get what you train for.

A majority of sports require explosive power (strength + speed) in order to play up to full potential. While the Olympic lifts do not mimic many specific sports skills such as running, throwing, or catching, they do develop the specific adaptation of explosive power. Power is the ability of the body to produce the greatest amount of force in the shortest possible time. This is represented by the simple equation; force × velocity. The two Olympic lifts and their derivatives have been shown to increase velocity of movement and rate of force production (2,3,4). In fact, the second pull of the power clean exhibits one of the highest power outputs of any resistance training exercise (5,7). Additionally, maximum strength (force) can be enhanced by performing Olympic weightlifting variations such as heavy squats, deadlifts, and presses (5,8). Thus, it is safe to say, Olympic lifts and their derivatives adhere to the SAID principle and can be an effective exercise selection for enhancing overall power and athletic performance (as long as the athlete possess the functional capabilities to perform these movements) (5).

As mentioned earlier, Olympic lifts do not mimic many specific sports skills such as running, throwing, or catching. However, one static/dynamic posture Olympic lifts do mimic often seen in athletics is the Universal Athletic Position (5). This position is described as standing in a quarter squat with feet flat, the hips are behind the center of gravity, shoulders are in front, the torso is flat (inclined at an angle of about 45º) weight distributed on a full foot, hands in front, knees over the toes, and shoulders over the knees (5). The Universal Athletic Position is generally regarded as the most common position in all of the sports (5). In some cases, it is used as a static “ready position” such as a linebacker waiting for a play to begin or a baseball player preparing to steal second base. Other times, the athlete moves through the Universal Athletic Position dynamically (during a countermovement or wind-up) to exploit the stretch-shortening cycle (5). The Olympic lifts, when performed correctly, move through the Universal Athletic Position between the first and second pull phases allowing the hip extensors and ground reaction forces to explode the bar vertically (5).

What Does the Research Say?

Conclusion
Based on the current evidence, there is ample justification to incorporate Olympic lifts into a sports performance conditioning program. Although no research study can be considered as definitive cause-and-effect, the literature consistently provides enough evidence that Olympic lifts and their derivatives improve the rate of force production, high-load speed strength, maximum strength, and vertical jump performance while using dynamic postures (Universal Athletic Position) commonly seen in many sports (5). The combination of all these factors should improve athletic performance for athletes engaging in explosive sports. However, before implementing an Olympic lifting program it is vital to understand the technical aspects, complexities, and functional requirements for athletes to perform these movements safely and effectively.