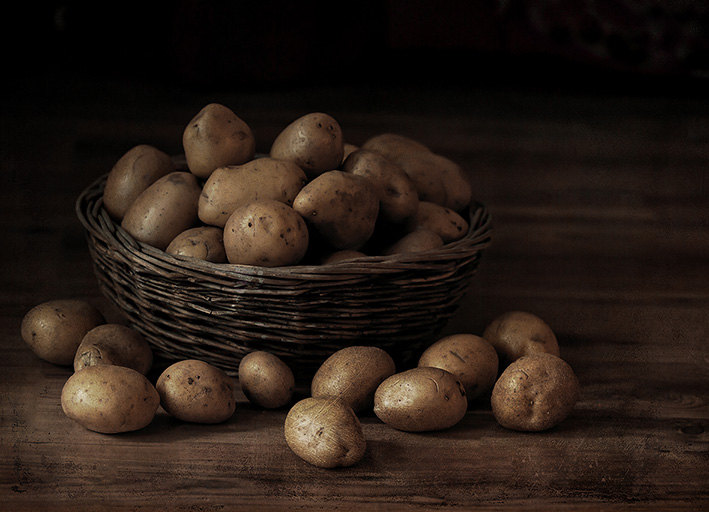 While some proclaim that potato consumption in North America is excessive, it isn’t.  Americans consume more desserts than potatoes.

On average, adults consume 36 – 93 calories from fresh potatoes per day (depending on gender).  Meanwhile, we eat 138 calories daily, on average, from cookies, cakes and other grain-based desserts.

Fresh potato consumption has decreased over the past 40 years.

While serving as an army pharmacist during the Seven Years War (1754-1763), Frenchman Antoine-Augustin Parmentier was taken prisoner by the Prussians. Served a diet composed almost exclusively of potatoes, he survived.

In fact, on his release several years later, he was actually in good health. (He must also have been consuming foods with vitamins A and D, as these nutrients are not found in potatoes.)

He went on to become a huge proponent of potatoes as ordinary food in France. Until he came along, the French considered potatoes to be worthless, except as hog feed. Thanks to him, we have Potatoes Parmentier.

And then there is Chris Voight, the man who ate nothing but potatoes for two months.  He lost weight and improved lab markers.  See here and here for more.

One medium potato contains 79% water, 10 vitamins and minerals, 4 grams of fiber, and 4 grams of protein. In fact, you could eat only potatoes and still meet your basic protein needs.

Potatoes are similar in nutrient density to other starchy vegetables and contain low levels of phytic acid.. This is relevant because phytic acid inhibits the absorption of nutrients. In other words, potatoes don’t inhibit you from taking in the nutrients you need.

Fresh potatoes tend to be one of the most satiating foods based on satiety studies – both short term and long term, subjective and objective.  The calorie density of potatoes is low and someone would need to eat about 5 pounds to reach 2000 calories.

Sound impressive? It is. But here’s the problem: Processed potato products don’t have the same effect on satiety.  When potatoes become a vehicle for salt, oil, butter, sour cream, and bacon, they are easier to overeat.

Check out how different varieties of potatoes compare:

How a potato is cooked and served influences how it’s digested in the body, as well as its glycemic index.

The glycemic index (GI) is a measure of how quickly glucose appears in the bloodstream after eating a specific amount of a carbohydrate dense food. It’s thought that higher GI foods are more likely to lead to blood sugar and insulin management problems.  While lower GI foods are better for sugar and insulin management. White potatoes (and sweet potatoes) score fairly high on the GI scale.  In fact, both foods score higher than table sugar. However, this score varies wildly by type of potato and preparation method.  For example, baked potatoes tend to score higher than boiled.  New, and some varieties of white potatoes, score the lowest. Because of the relatively high GI of potatoes, some people avoid them for fear of blood sugar swings and insulin problems.  However, the GI is only valid when a food is eaten by itself.  And most foods eaten with potatoes (meat, vegetables, etc) lower the GI of the entire meal significantly, making the meal a low glycemic index one and negating these concerns.

Before we all go invest in potato crops, let’s not forget about glycoalkaloids (GAs).  GAs are nitrogen-containing plant metabolites that help defend against pests, pathogens, and so on.  When consumed to a point of toxicity, they disrupt cell membranes and inhibit neurotransmission. More than 80 GAs have been identified in various potato species. The two most common are α-chaconine and α-solanine. GAs accumulate due to extreme climate conditions, insect infestation, and exposure to artificial light/sunlight. If you pay close attention, you’ll notice that potatoes will start to turn a light shade of green when left sitting in the sunlight.  This is solanine.  When this happens, they should not be consumed.  It’s critical to store potatoes in cool, dark, dry areas to prevent increased GAs.

Potatoes and other plants of the Solanum genus contain higher amounts of GAs (when compared to other plant foods).  Skins, peels, leaves, and flowers of potatoes contain the most GAs.  The actual potato flesh tends to be low.

Peeling a potato significantly reduces GAs. That’s because most GAs concentrate in the first millimeter of the potato (from the outside working in).

Deep frying potatoes with peels allows GAs to migrate from the peels into the oil.  Repeated deep frying can thus concentrate GAs up to three times.  And since it’s more common for people to “overeat” potato chips and French Fries, it’s easier to rack up GAs from these sources.

In countries where fried potato consumption is higher, irritable bowel disease is often higher too.  Mice predisposed to intestinal inflammation that are fed a diet of fried potato skins get an irritated intestine.

Small potatoes tend to contain more GAs than larger ones. Potatoes are continually being modified to reduce GA levels via genetic modification and interspecies hybridization.

Commercial potatoes must contain less than 20 mg of GAs per 100 g of potato before they can be sold.  If a potato tastes bitter, it’s probably higher in GAs.

Daily intake of GAs from potatoes in the US and the UK is approximated to be 13-14 mg.  Clearance from the body takes about 24 hours.

Despite all their negative effects, GAs may also have beneficial effects, depending on dose and condition, including:

Acrylamide and acrolein are also toxins to the body. Both are formed with heat treatment of certain foods, including potatoes.

The higher the cooking temperature and the longer the cooking duration, the more acrylamide and acrolein generated. (For more, see All About Cooking & Carcinogens.)

Potatoes also contain lectins (proteins that defend against microorganisms).  In high amounts these can irritate the GI tract. (For more, see All About Lectins.)

As people’s sensitivities to GAs, acrylamide, acrolein, and lectins vary, it’s important to monitor your own response to potatoes.  (Or any food, for that matter.)

In other words, if potatoes make you feel ill, try removing the peels.  If the feelings persist, you may want to cut back on your intake.

Conventional potatoes may be sprayed with bud nip (chlorpropham) to prevent budding.  Bud nip is also toxic when ingested.

Eleven-year-old Elise Gladcock discovered this while researching her science fair project. I didn’t learn about it until my twenties.

According to the Environmental Working Group, it’s probably wise to choose organic potatoes.  With nearly 2 billion dollars spent annually to protect vulnerable potatoes, we can assume this results in lots of chemicals on conventional crops.

Since organic potatoes are exposed to fewer pesticides, they might contain a slightly higher proportion of GAs. That’s because their own defense mechanisms kick in when they aren’t given the artificial armor of the pesticides.

Potatoes produce more energy per day on a given area of land than any other crop.  Compare to a grain crop, for example. Only 33% of a grain plant is edible, versus 75% of a tuber plant.

Potatoes take 2-3 months to mature and can be stored for long periods of time.  They are an efficient means of converting land, water, and labor into nutrition.