OFF ICE TRAINING FOR HOCKEY GOALIES: 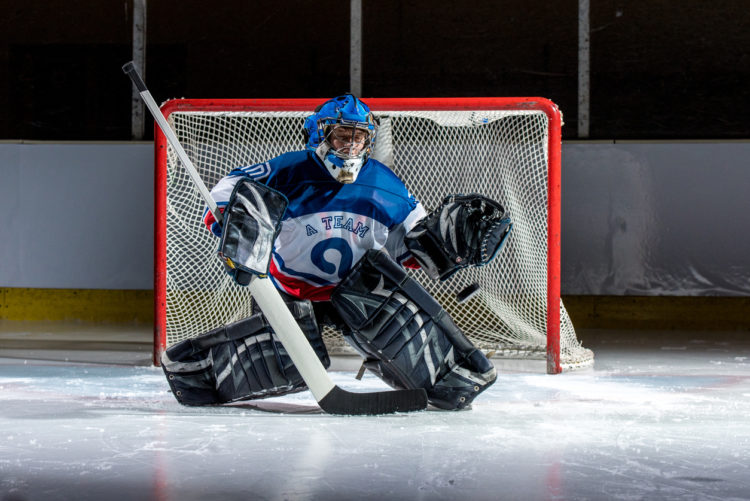 When someone says that you have potential, they are really saying, “You could be great, but you aren’t right now.” Athletes typically don’t ever want to hear these words, especially goalies, but it is an opportunity to be coached and improve. Goalies are some of the most competitive people out there (I know from experience). We hate when we can’t perform at our best and stop every puck. Though usually thought of as a little weird, goalies should be the epitome of athleticism and intelligence. We need to know offensive and defensive strategies, as well as our own position. Then, we need to have the skill to turn that knowledge into a physical response, all while having a fraction of a second to react. Intelligence is developed through quality game experiences and exceptional goaltending coaches. Watching game film and skating daily will help to perfect the specific skill sets needed to play at a high level and athletic performance can be worked on while skating. Unfortunately, performance can also be hindered if your body is unable to move according to the specific demands of the position. Off ice training is a crucial aspect of success and should be a focus all year long.

How A Goalie Moves

“Every movement a goalie makes involves a pivot [on your feet] or rotation [in your butterfly] to get to your angle and stay square to the puck. How fast you rotate is a skill. How accurate you are with your rotation is another skill.” – says former National Hockey League goalie coach Shane Clifford.

Angle, square and depth are the three components, collectively involving a rotation or pivot, to getting yourself in the best position to make a save. If the puck had imaginary lines going straight out to each post, angle would refer to having your body in the center of those lines. Being square refers to having your shoulders, hips, and toes facing the puck. Depth is simply how close or far away you are from the puck in relation to the net. These key points are listed in order of importance, which is why goalies must move in certain ways to be the most efficient. For this article, we are going to focus on the T-push and butterfly.

The basic skating motion for a goalie is called a T-push, which is performed when the puck is passed between players and a greater distance must be covered to get feet stopped and set before the shot. This movement involves both external and internal rotation of the hips, as you must point your lead foot and knee in the direction you are skating, then turn that foot perpendicular to the motion traveled to stop. Watch here.

Once in position, the most common save selection among NHL and amateur goalies are the butterfly (dropping to both knees to make a save). When done correctly, the butterfly involves hip internal rotation, hip adduction, and hip extension. That is an incredible demand on the hips and is performed countless times during practice and an average of 25 times per game (for the shots counted that actually hit the net).

The recovery out of the butterfly involves hip external rotation, hip flexion, and hip abduction. It, more importantly, involves spinal rotation. The power a goalie generates, much like a golfer, comes from the rotation of the hips around the spine. The powerful rotation through the hips allows a goalie to quickly move in a straight line with angle, square, and depth on the next shot when applicable. Watch here.

All of the previous motions listed would take a total of fewer than 5 seconds to make during a game. This is a “simple” procedure when following the pass and saving a shot. Within this procedure, posture must be maintained and hands must be able to move fluidly to save the puck as well.

How Your Body Moves

Determining what muscles are overactive and underactive is the starting point for any workout routine. If your body is unable to move as a goalie should, there is an increase in risk for injury and an inability to attain peak performance levels. The Overhead Squat Assessment is one of the best tools to find such imbalances.

The Overhead Squat Assessment is performed by standing with your feet hip-width apart (shoes off) and performing a squat with control and even tempo while keeping your arms straight and overhead. The squat is assessed from the posterior, lateral, and anterior views. Each view focuses on particular points throughout the kinetic chain to evaluate muscular imbalances. Follow the link for the Overhead Squat Assessment solutions chart.

How To Train Your Body

Every goalie is very particular with pregame routines and in season workouts, which is why I break down the workout schedule as follows for my players:

Incorporating corrective exercise is also incredibly important when designing an off ice program. Once you can determine the overactive and underactive muscles using the Overhead Squat Assessment, the first priority is to correct these issues using the four-step NASM Corrective Exercise Continuum.

These corrective workouts should be completed on the first day of each week of the program. During the season, I place these specific workouts as “recovery workouts” after a weekend of games. This allows players to take a “day off” while still being productive.

With the corrective workouts in place, the rest of the week can focus on each particular area of flexibility, stability, strength, and power.

In Season: Approximately 8 months or longer with playoffs

Here we are maintaining gains from the off-season workout. Gains should be considered as a ratio of weight lifted to body weight, not the actual pounds, as weight loss may occur during the season. We are also staying injury free and performing at our best. The demand is higher in goalie-specific motions, so you must counteract this by keeping the corrective exercise programming within the workout routine. The primary focus is on performance as workouts may need to take a backseat to games and practice. When weeks have multiple games, the corrective workouts may be the only ones performed. Keep the majority of workouts focused on stability or explosive programming as possible, using various training aids when needed.

When training, you must know what you are doing and why you are doing it. That is why it is very important to know how a goalie moves and what your body is capable of doing. Correct the current issues and exercise to prevent developing new ones. Focus on gaining flexibility, stability, strength, and power during the off-season and maintain those gains during the season. Eliminate your ‘wasted’ talent and find the peak of your performance. Remember, you shouldn’t want to live up to your potential, you should want to go beyond it and maximize performance!