HOW HARD GAINERS CAN ADD SIZE AND WEIGHT 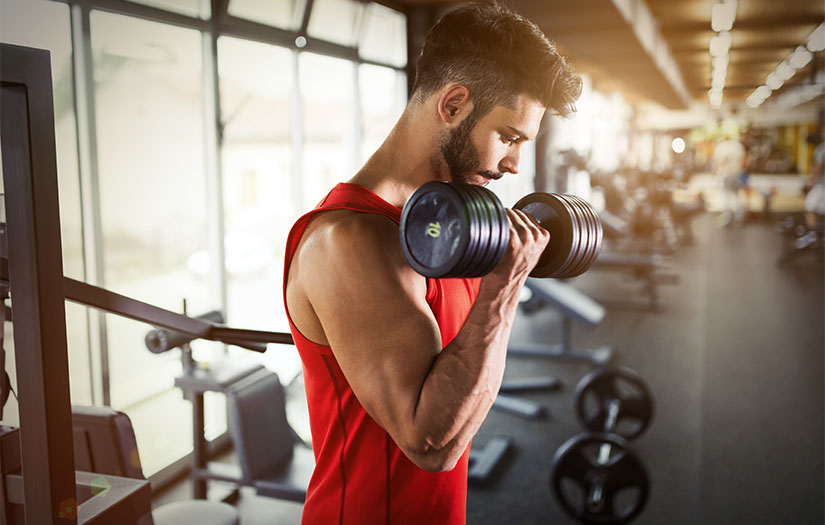 There is little doubt that human bodies come in different shapes and sizes. Although all humans can stimulate muscle hypertrophy, genetic predisposition most certainly plays a role in how fast an individual gains muscle, how strong they can become, and how much skeletal muscle mass they can build before the body no longer responds well to training. Genetics may influence lean mass-building capacity by 50 to 80 per cent (Roth, 2012). In the world of weight training, the goal is often to gain lean body mass (muscle), while minimizing gains in fat mass. As is the case with my children, some of us have a harder time gaining muscle mass than others. If you are training clients, you will interact with hard gainers as well.

As humans generally like to classify everything, there is a classification system for body types called somatotype. Interestingly, these somatotypes were created in the 1940s by psychologist William Sheldon when trying to classify personality types. Although that theory has been mostly discredited, Sheldon’s classification system of somatotypes has proven somewhat useful in determining physiologic parameters and may be extremely relevant when determining the effect of genetics on the ability to build lean body mass (Gutnik et al., 2015).Although there is a spectrum of body type diversity and not all people can be characterized into these three sub-types most people have traits that represent a combination of at least two though there are individuals that fit squarely into one category.

This somatotype represents those of us who have long limbs, thinner bones, smaller shoulders, and do not tend to gain either fat or muscle mass easily. Oftentimes, these individuals have a higher metabolic rate than their peers which makes attaining the caloric surplus necessary for bulking (gaining muscle mass) more challenging (Gutnik et al., 2015). Mark and Andrew are likely both ectomorphs.

This somatotype is classified by a relatively square build with wide shoulders and a narrow waist. They are not typically overweight or underweight. This body type tends to gain and lose weight as predicted and will build muscle predictably (Gutnik et al., 2015). This somatotype is very favourable for bodybuilders. Tristan and Lorelei are likely both mesomorphs.

This body type is often described as stocky. These individuals often have large muscles and bones, but also a bit of extra fat. This somatotype may be described as very strong because of its large bone and muscle size. Many powerlifters belong to this cohort. They tend to gain both muscle and fat easily but have a difficult time losing weight likely due to a slower-than-average metabolic rate (Gutnik et al., 2015).

What is a Hardgainer?

The term “hard gainer” is a bodybuilding term that refers to an individual who, despite aggressive training, seems to have some difficulty gaining lean mass and overall body weight. Although most hard gainers have an ectomorph somatotype, it is a bit of a chicken and an egg question.Do these individuals have a genetic predisposition to have that body type? Do they have a higher metabolic rate at baseline and struggle to stay in a caloric surplus? Do their bodies just adapt to more food intake by increasing their non-exercise activity thermogenesis subconsciously? The truth is, there is very little in the way of definitive research to give us these answers, but if you have found yourself in this situation, there are diet and exercise tips that can help any hard gainer make progress.

The Physiology of Gains

Significant muscle gain for any human regardless of somatotype requires a combination of a resistance training program providing a high stimulus for muscle hypertrophy in conjunction with a caloric surplus. Physiologically, when resistance training is completed and the muscle tissue senses stress and damage, it activates muscle satellite cells triggering increases in muscle fibre cross-sectional area.Simultaneously, the endocrine system reacts by triggering the release of growth hormone, testosterone, insulin-like growth factor (IGF-1), hepatic growth factor, and fibroblast growth factor to enable protein uptake and other metabolic process needed to fuel muscle growth.Although all human muscle tissue responds to stimulus and grows by the same process, there are differences in genetic predisposition, age, gender, the proportion, and distribution of type I (less prone to larger size) versus type II muscle fibres (more prone to hypertrophy) and other factors that can influence the degree of muscle hypertrophy (Schoenfeld, 2010). However, there are certain measures that hard gainers can take to maximize muscle growth.

A Periodized Training Program with the Goal of Muscle Hypertrophy

An annual plan should be created that incorporates elements of stability training and each phase of strength training per the OPT model. This can be accomplished either via a linear periodization scheme (mesocycles in each phase of approximately 4 weeks), or an undulating periodization scheme (training in all three phases simultaneously in those 4 weeks).There does not appear to be any significant difference in the degree of muscle hypertrophy attained by using either method if a periodized plan is followed (Grgic et al., 2017). The periodization scheme should also spend most of the time training in phases 3 (hypertrophy) and 4 (maximum strength) of the OPT model (Clark et al., 2014).

Intensity and Volume are Guided by Phase

Each phase of training sets guidelines for the training intensity and training volume. Likewise, the goal of each phase is the name of the phase. For instance, phases 1 and 2 are focused on both stability and muscle endurance. Phase three demands a higher overall training volume and intensity by increasing the load and sets.Phase four provides maximum motor unit recruitment and is primarily concerned with training the nervous system to fire all available muscle fibres. This then allows the lifter to return to the hypertrophy phase with better neurological control which in turn allows the lifter to use heavier weights leading to an increase in muscle mass (Clark et al., 2014).

If you want to calculate your 1RM, check out this calculator!

Focusing on multi-joint exercises that mimic functional movement patterns (i.e., squats, deadlifts, bench presses, pulldowns, rows, lunges) instead of single-joint exercises (i.e., bicep curls, knee extensions, and front raises) will maximize muscle growth and time efficiency. Similarly, compounding exercises by completing two exercises that utilize the same muscle group back-to-back will create more muscle stimulus than completing one exercise per muscle group (Krzysztofik et al., 2019).Hypertrophy phase tempos: Longer Eccentric PhasesThe time spent at different phases or using different contractions in a lift will produce different muscle adaptations. Generally, there is a lot of focus on the concentric or shortening phase of a muscle. This is the portion of a lift where you must contract a muscle or muscle group hard to move a load.Although focusing heavily on this phase may produce greater strength adaptations, it is the opposite of this phase, or the eccentric phase, that will produce the greatest muscle damage and ultimately favour muscle hypertrophy.H.S.M. Azevedo et al. (2022) conducted a study reviewing the ideal time window spent in the eccentric phase of a knee extension exercise. The researchers determined spending 2 to 4 seconds in the eccentric phase of an exercise provided significantly more muscle hypertrophy as compared to a 1-second or less eccentric phase.Likewise, the OPT model suggests a 2-second concentric, 0-second isometric, and 2-second eccentric phase for each exercise performed in the hypertrophy phase (Clark et al., 2014). Slowing down your eccentric phases can go a long way toward increasing muscle size.

What Diet is Best for an Ectomorph?

Muscles need the proper fuel timed at the proper intervals to grow. The key to maximizing muscle gain in an ectomorph or hard gainer should focus on three major elements- adequate protein, nutrient timing, and caloric surplus.

Protein is the macronutrient needed as the raw material to repair muscle damage leading to an increase in muscle size. Although there is some variation in intake recommendations, generally intakes of 1.6 to 2.2 g/kg per day will produce the best results for increasing lean body mass when proper resistance training protocols are followed (Aragon et al., 2017). This means that a 150 lb. person should consume between 110 and 150 g of protein daily.

It is not just the amount of protein, but how it is spread throughout the day that will help promote muscle hypertrophy. For most individuals, doses of 20 to 40 g every 3-4 hours (during waking hours) are about all the body can utilize for this purpose, otherwise, the excess is used for energy or stored as fat. Similarly, ensuring that a high-quality protein is ingested within 2 hours of resistance training will help promote muscle protein synthesis (muscle building).Likewise, ensuring that adequate carbohydrates are consumed to provide energy during training and facilitating the metabolic processes necessary for muscle hypertrophy is critical. Daily carbohydrate intake should comprise about 50 per cent of calories, or more if you are extremely physically active. Consuming carbohydrates before and/or during resistance training can also facilitate muscle hypertrophy.Ensure that you consume a post-exercise snack with both carbohydrates and protein (0.8 g/kg of carbohydrate and 0.4 g/kg of protein) will provide the best results (Kerksick et al., 2017).

A caloric surplus (consuming more calories than you expend) should be carefully monitored in hard gainers as it is theorized that their bodies may be highly adapted to changes in food intake. A calorie surplus of between 300 and 700 kcal/day can produce muscle gain with more limited gains in fat mass. Carbohydrate and protein intake should be calculated first and fats can be added until desired total daily calories are met (Aragon et al., 2017). Measuring and tracking food intake daily as well as tracking body weight at least weekly can be a practice that helps ensure the caloric surplus needed for muscle gains.

Humans come in a variety of shapes and sizes. Many factors make muscle hypertrophy easier for some and harder for others. Rest assured, that although muscle hypertrophy may be more difficult to attain in hard gainers, it is not impossible. The same principles of hypertrophy apply to everyone. Ectomorphs (or hard gainers) may have to be more vigilant at following these principles more precisely than their mesomorphic or endomorphic counterparts.