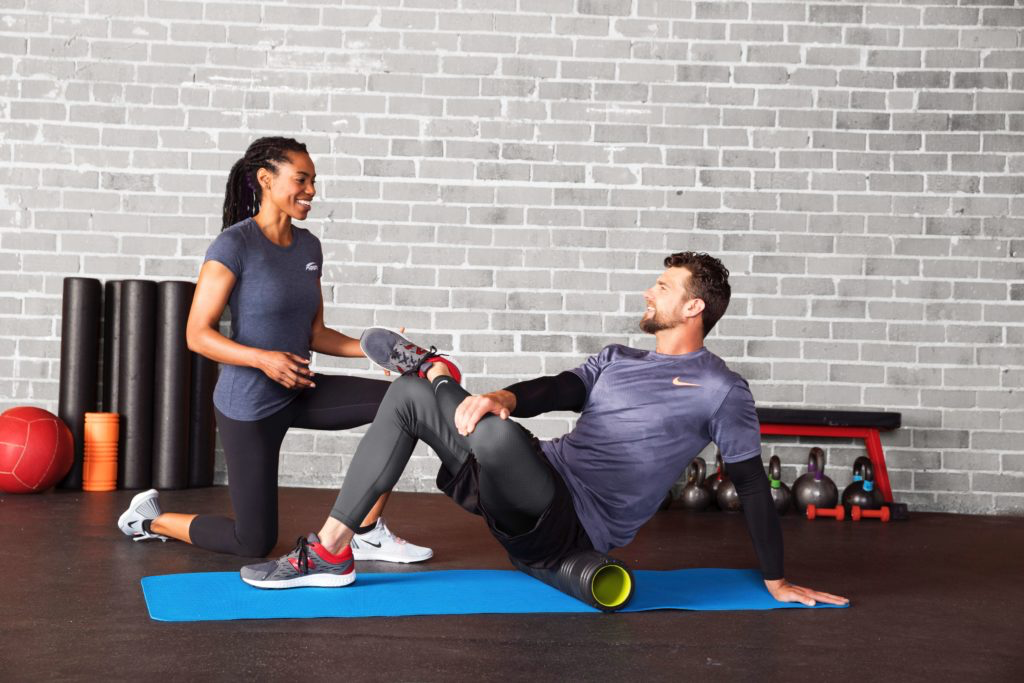 Effective and efficient rolling means identifying and targeting the muscles that need it – the muscles that are likely the root cause of less than optimal movement. In many cases, muscles become overactive and short, leading to sensations of tightness and discomfort in other parts of the body. A prime example is a person with a rounded upper body posture who feels tightness in their neck and shoulders. While it is tempting to invest in a new tool to reach these areas, the key to relief is to relax, mobilize, and lengthen the muscles pulling the shoulders forward. Thus, instead of spending all day, every day, “releasing” the upper traps, rolling the pectorals, latissimus dorsi, and thoracic spine will help to reduce the pull on the shoulders and subsequently reduce the feelings of discomfort and tightness in the neck.

Foam rolling was first introduced to the fitness industry, on a large scale, in 2001 with the publication of NASM OPT Optimum Performance Training for the Fitness Professional. This original spiral-bound text included seven areas to roll and all with a basic white foam roller. The growth of the foam rolling product industry has led to a significant expansion in exercises and techniques. For example, at the time of this writing, one popular foam roller manufacturer lists more than 30 different types, shapes, and styles of foam rollers! Many of these rollers serve essential purposes. The handheld roller is for those who prefer not to get on the ground. There’s also a “hook” shaped tool to help reach the difficult to reach spots of the neck and between the shoulder blades. While beneficial, specialized tools and fancy devices are not required to roll effectively.

The following are six areas of the body that most people will benefit from rolling. As we roll through these, I will connect the area with the movement compensation. Also, I’ll share a two-step approach:

The calves are a group of muscles that usually need some foam rolling attention. They need attention due to, in large part, to the types of shoes worn. An elevated heel will keep the calves in a constant shorter than ideal position. Over time, the body adapts to this. Further, walking patterns that do not encourage full extensibility of the muscles (e.g., walking with feet turned out) may also be associated with short calves. In the overhead squat, the feet turning out, knee valgus, or excessive forward lean may all be improved with lower leg foam rolling.

Begin with the roller just above the ankle, roll the length of the muscle slowly (~1″ per second) to identify a tender spot. Hold pressure for ~30 to 60 seconds.

The quadriceps and hip flexors are grouped here for two reasons.  First, they are often both overactive for the same compensations. Second, an individual can easily roll from one directly into the other (in fact, the rectus femoris is a weak hip flexor). Hip flexors are commonly short and potentially overactive due to the long hours spent with the hips flexed while seated. Even the most active people, according to modern standards, still likely spend more time seated than we should. Like the calves, the body adapts by eventually limiting the amount the hip flexors will extend.

Further, one may see a regional interdependence effect take shape – if an individual cannot fully extend their calves while walking, they also are not demonstrating full hip extension. Thus, the shortening adaptation effect may compound. Overactive quadriceps may be secondary to short hip flexors, as reduced hip extension means less firing of the gluteals. To maintain force production during movement, the quadriceps may rely upon more leading to increased activation. In the overhead squat assessment, knee valgus, anterior pelvic tilt, or knee dominance (i.e., “knee squatter”) may improve with foam rolling the quadriceps and hip flexors.

Begin with the roller just below the iliac crest with the body slightly rotated to target the tensor fascia lata. This is a small muscle, so little rolling is usually required. Hold pressure for ~30 to 60 seconds. Next, position the roller just below the hip joint and roll the length of the muscle (to just above the knee) slowly (~1″ per second) to identify a tender spot. Hold pressure for ~30 to 60 seconds.

The gluteus maximus is rarely, if ever short and overactive, BUT most people spend a large portion of their day sitting. The constant downward pressure applied to tissues of the posterior hip may be enough to prevent proper fluid circulation. Spending 90-120 seconds rolling the gluteus maximus is intended to bring fluid back to the tissues. For this reason, the steps to address the gluteals are slightly different.

Perform slow, consistent rolling of the area (moving at a pace of about 1″ per second) for ~60 to 90 seconds.

As the name suggests, the goal is to target the thoracic spine more so than the muscles around it. The purpose of this exercise is to get some movement in the upper back. The thoracic spine is an area that should express a good deal of rotation as it spans 12 vertebrae. However, due to poor posture and an overall lack of movement variety (i.e., rotation from quick walking or running, reaching overhead, etc.), the thoracic spine can become stiff and “stuck” for lack of a better term. Use the roller and active movements to help encourage thoracic extension and rotation. In the overhead squat, a client may have difficulty standing up straight or getting (and keeping) the arms up in line with the torso.

Begin with the roller just below the scapulae, roll the length of the thoracic spine slowly (~1″ per second). The area is usually not as tender as, say, the quadriceps. If you don’t find sore spots, then roll through the area continuously for ~60 to 90 seconds.

Perform a series of thoracic extension movements. First, place the foam roller in the lower region of the thoracic spine. With hands supporting the head, lean back into thoracic extension. The goal is to introduce a slight degree of movement versus trying to get the head to the floor. Perform 4 to 6 extensions. Repeat this process first with the roller in the middle of the scapulae and then just below the shoulders.

The “pecs” typically include both the pectoralis major and minor. The pectoralis minor is usually short and overactive due to the compounding effect of poor posture and dysfunction breathing. As a secondary respiratory muscle, the pectoralis minor activates to help elevate the rib cage. This is a necessary task during heavy breathing when performing higher intensity physical activity. When this occurs during rest, day in and day out, problems may arise. It is essential to recognize that the pectoralis minor is a scapular depressor but will often lead to anterior tipping of the scapulae. If the scapulae cannot posterior tilt, then it will be challenging to get and maintain the arms overhead. In the overhead squat, a client may demonstrate the arms falling forward.

Begin with the roller, just medial to the tip of the shoulder at a slight angle. Rolling the pecs is safe for all genders as the roller should be just lateral to the breast tissue, and there will be minimal rolling. If needed, a small side-to-side rolling motion can be used to identify a tender spot. Hold pressure for ~30 to 60 seconds. Note that the brachial plexus compresses in this position. If you feel numbness or tingling, reposition the roller.

Begin with the roller near the inferior angle of the scapula, roll slowly (~1″ per second) up the lateral border of the scapula to the shoulder to identify a tender spot. Hold pressure for ~30 to 60 seconds.

We will conclude with the famous saying, “just because you can, does not mean you should.” Just because you can invest hundreds or even thousands of dollars in foam rolling equipment, does not mean you have to in order to see results. The simple investment in an essential foam roller and massage ball is enough for most people to improve how they move.