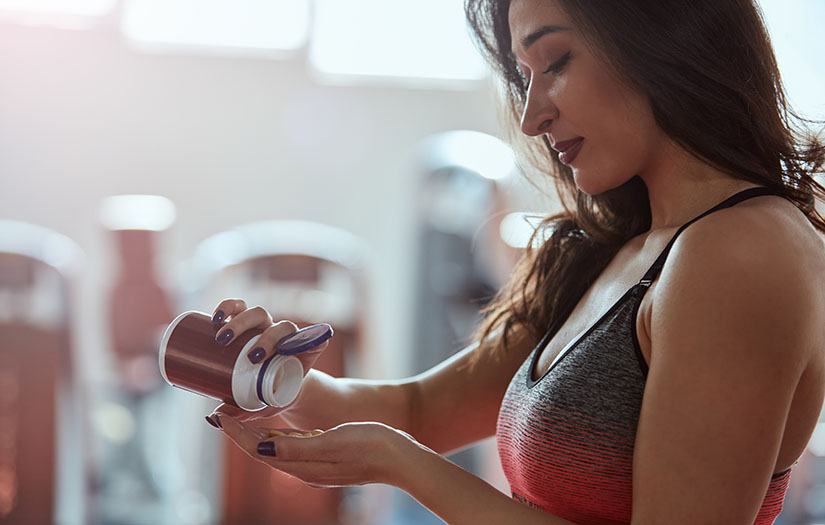 Muscles aren’t just for men! Women need muscle too… and ladies, while you may not want muscles as big as men (or maybe you do), I think most women can agree it seems like everything on the market is geared to helping men build muscle, not women! Due to major differences in female and male physiology, the capacity to build and maintain muscle over a lifespan is going to be slightly more difficult for females. So, in that case, what are the best muscle-building supplements for women?Before diving into supplements, it is important that we first recap some major differences in female and male physiology that are going to play major roles in the ability to build muscle. Even more, information can be found in the Women’s Fitness course.

1. Men have more circulating testosterone compared to women. On average men have 300-1,000 ng/dL of Testosterone while women on average have levels of 15-70 ng/dL. Testosterone is a very anabolic hormone and is the major hormone responsible for increasing lean mass and strength. Due to this difference, men on average have 8.4% more lean mass compared to women. BUT wait… what about estrogen? Yes, women have higher levels of estrogen, and estrogen is an anabolic hormone. However, its role in stimulating muscle protein synthesis is not as great as testosterone. 2. Women have menstrual cycles! The presence of the menstrual means constant fluctuations in hormones throughout the month, and the phase of your cycle can affect your ability to build muscle. The menstrual cycle is commonly divided into two main phases: the follicular and luteal phases. The follicular phase is commonly referred to as the “low hormone phase” while the luteal phase is the “high hormone phase.”

During the “high hormone phase”, the hormones estrogen and progesterone are at their highest, with progesterone superseding estrogen. Progesterone is extremely catabolic and makes it more difficult to build lean tissue. Furthermore, as women age and enter menopause, muscle mass and strength rapidly decline with declining levels of estrogen (we don’t see as significant muscle and strength declines in ageing men).

Protein is going to be every woman’s best friend! High protein intakes are going to be the biggest driver of maintaining or building muscle, especially during the luteal phase of the menstrual cycle. Remember how we mentioned progesterone is a catabolic hormone? That means your body is more likely to break down muscle and it’s going to be harder to build muscle.

Therefore, it’s important to emphasize a higher protein intake during this time. High protein intakes are especially important as we age! After about age 50-55, it becomes much more difficult to build and maintain lean tissue (how fun is menopause?). Protein intakes should be between 1.2-2.2g/kg/day. Lower ranges for maintenance and higher ranges for building!

Whey protein powders will give you the best muscle-building response over plant-based options. However, the goal is to make sure your 30g protein serving has at least 2-3g of leucine. Leucine is the main amino acid in stimulating muscle protein synthesis.

When is the best time to dose protein as a woman? Ideally, spacing your protein ingestion every 3-4 hours, and within 30 minutes to an hour after exercise is going to be best (especially in that high hormone phase)!

Creatine is a combination of amino acids that naturally exist in your muscle and can naturally be consumed through red meat. Women exhibit 70-80% lower endogenous creatine stores compared to men due to lower amounts of lean tissue (and often because women don’t eat as much meat products as men). Creatine is mainly known for its ability to significantly augment lean mass and strength. It is typically recommended to consume doses of 5-10g/day to fully saturate stores and experience increases in muscle mass.

To date there isn’t much research to discern gender-specific doses, however, it is suggested that higher doses of 0.3g/kg/day during menopause are needed to see muscle-building effects.

Due to constant changes in hormones during menses, pregnancy, postpartum, and menopause, creatine supplementation may be extremely helpful. It is postulated that during the luteal phase or for women with low estrogen levels, creatine can offset decreases in muscle protein synthesis.

The biggest reason many females avoid using creatine is the fear of weight gain that is often associated with the supplement which is due to increases in cellular hydration. However, many studies have shown women were able to experience gains in strength, power, and athletic performance without marked changes in body weight — it has been found men more often experience rapid weight gain when taking the supplement.Current evidence suggests dosing strategies for females and males can be the same, with doses of 5-10g/day daily.

While omega-3 fatty acids are widely known for being anti-inflammatory, recent attention has been given to their ability to assist at the molecular level in muscle protein synthesis.

While more research is needed, some studies have suggested that increases in muscle mass were more pronounced in females performing resistance exercise when dosing with omega-3 fatty acids.

One study that evaluated vitamin D status across BMI classes between men and women found on average, women had lower vitamin D levels.

For women that spend most of their time indoors or during the winter months, Vitamin D supplementation might be worth adding to your routine to help keep up with all your hard work in the gym!

Arginine is a conditionally essential amino acid that plays major roles in muscle protein synthesis, creatine, and nitric oxide synthesis, and stimulation of growth hormone secretion. While no evidence currently exists on gender-specific dosing, it is currently suggested that doses of 3-9g/day can promote improvements in athletic performance.

Ladies, your muscle matters too! While supplementation to improve gains in muscle mass and strength are similar across the two genders, certain supplements might be more important to improve skeletal muscle mass if you are a woman (especially during various life stages).

While women on average have less muscle mass compared to men, the ability to build and maintain muscle can easily be attained with the consumption of a high protein diet and adequate intakes of essential vitamins and minerals.

Jackie Kaminski is a registered dietitian/ nutritionist with a Master’s degree in Exercise Physiology & Sports Nutrition from Florida State University. Her first introduction to working with professional athletes was back in 2017 when she worked at the UFC performance institute in Las Vegas, Nevada. Since then, Jackie has worked with various professional fighters and other clientele and now operates under the company she started back in March, The Fight Nutritionist LLC. The Fight Nutritionist is dedicated to providing the most effective nutrition plans to ensure her athletes are performing at their absolute best. All of her plans are individualized to the athlete and are backed by the latest research to ensure complete safety and efficacy. Jackie is also a member of the international society of sports nutrition, where she often participates in different research projects and data collection with other ISSN members from Nova University. When Jackie isn’t working, you can find her at Combat Club where she trains in kickboxing and Muy Thai. As a sports dietitian, Jackie’s aim is to provide her athletes with the necessary fuel to excel in training and provide the proper education to ensure her athletes are engaging in the safest health practices (as they relate to combat sports).