THE PALEO DIET FOR STRENGTH/POWER ATHLETES 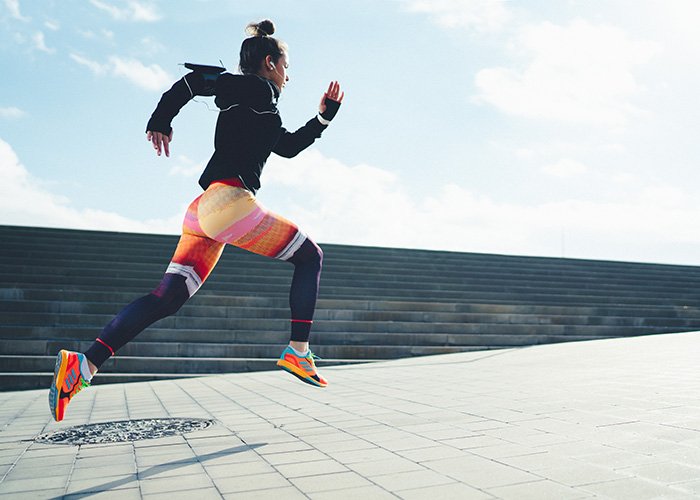 The Paleolithic or “Paleo” diet derives from the superior cardiometabolic health and physical fitness of indigenous hunter-gatherer populations (Hills Jr & Erpenbeck, 2018). The Paleo diet is promoted across the world as a way of improving health of human beings and decreasing diseases that spread due to various risk factors (Sachdev et al., 2018).

Evidence suggests that this diet may lead to improvements in physiologic functions and metabolic effects compared with diets recommended by national and international nutrition guidelines.

However, the contribution of the Paleo diet to sports performance remains unclear with some researchers claiming the modern model of Paleolithic diet has an ergogenic potential (Bujko & Kowalski, 2014).

WHAT FOODS CAN YOU EAT ON THE PALEO DIET?

Strict Paleo dieters limit pseudograins (quinoa, buckwheat and chia) and legumes (beans, peas, lentils, chickpea, peanut) since they contain what they call “antinutrients” such as phytic acid. Tree nuts are allowed but only in moderation. While milk chocolate is not recommended, raw cacao can be consumed because of its high content of polyphenol antioxidants (Hills Jr & Erpenbeck, 2018).

While there are no specific macronutrient guidelines provided for the Paleo diet, macronutrient ratios generally fall into 30% calories coming from PRO, 30% from CHO and 40% from FAT. CHO intake is focused on low availability CHO due to the restrictions on grains, starches and processed foods (Harvard School of Public Health, 2018).

Athletes who participate in team sports are considered strength/power athletes, however, these sports are truly intermittent in nature. Players perform short bursts of higher intensity activity with submaximal activity occurring at other times during the game or practice session. All three energy systems must work effectively to power intermittent activity and glycogen stores are the major substrate contributor to both aerobic and anerobic pathways (Williams & Rollo, 2015).

Nutrition guidelines for team sports athletes with power components are 7-10 g/kg/day CHO, PRO needs for these athletes can oftentimes be met at a dose of 1.2-1.7 g/kg/day, however a range of 1.2-2.0 g/kg/day is more widely applied and can provide additional benefit towards the upper limit PRO. Fats should comprise 20-30% of total calories, but CHO and PRO needs should be prioritized (Bytomski, 2017).

Nutrient timing strategies, specifically dosing of high carbohydrate availability CHO, are critical for these athletes during matches or practices. A dose of 1-4 g/kg of CHO should be consumed prior to a practice session or game followed by a dose of 30-60 g of CHO (either as part of a hydration solution or alone) per hour of exertion.

A recovery beverage or meal should be taken containing 0.8g/kg of CHO and 0.4 g/kg of PRO to resynthesize glycogen stores and enhance MPS. Examples of high CHO availability foods include packaged and refined carbohydrate sources such as bread, pasta, crackers, cookies, etc (Mata et al., 2019).

However, these types of foods (including hydration solutions containing sugar) are not part of the Paleo diet (Sachdev & Rengasamy, 2018).

CHO availability is essential to performance in activities where there are periods of high intensity activity interspersed with submaximal intensity. Some studies support the Paleo diet for its positive effects on metabolic markers but there is little evidence supporting actual improvements in physical performance in the athletic population (Escobar et al., 2016).

Whilst true that, even at intensities of 85% VO2max, fat is used, carbohydrate is the unrefuted dominant fuel at those intensities and a deficiency in this supply of energy detracts from the athlete’s performance (McSwiney et al., 2019).

Similarly, PRO supplementation also becomes a significant challenge for athletes following the Paleo diet with the elimination of dairy. Many athletes supplement their diets with PRO due to high muscle breakdown robust evidence showing that PRO consumption pre- and/or post-workout induces a significant rise in MPS (Cintineo et al., 2018).

Two of the critical variables determining a PRO’s effects on PRO balance concerns its leucine content and the rate at which the protein is digested – whey protein supersedes other types of proteins currently available in this respect (Campbell et al., 2017).

The ability to perform multiple sprints at the athlete’s maximum speed after short rest is crucial for game performance in many team sports such as basketball and volleyball (Chang et al., 2017).

Glucose is necessary to keep the Kreb’s cycle turning efficiently. Therefore, when glycogen is depleted, FAT oxidation slows down (Powers & Howley, 2018). The relatively low CHO content, especially of high availability CHO, in the Paleo diet would significantly limit the athlete’s ability to replete and maintain optimal glycogen stores for maximum performance in their chosen sport.

POTENTIAL BENEFITS OF THE PALEO DIET FOR STRENGTH/POWER ATHLETES

Most the studies conducted regarding the Paleo diet, are geared toward endurance and intermittent athletes who have a high reliance on both the anerobic and aerobic energy systems, yet they do not focus on protein needs for these athletes. The Paleo diet is rich in lean meats (lean meat, fish, shellfish, eggs) and as a result encourages adherence to a high protein diet at baseline (Kowalkski & Bujko, 2014).

Although the elimination of milk proteins may make protein supplementation difficult, the Paleo diet is rich in egg protein which is thought to be an ideal protein due to its amino acid profile. Likewise, the diet is abundant in meat proteins which allows athletes to get plenty of selenium, iron, vitamin A, and B12 in addition to a high leucine content (Smith et al., 2014).

The tenets of the Paleo diet stem from the archaeological record and anthropological research based on which foods were available to humans during the period in history where most humans subsisted on hunting and gathering (Eaton, 2000).

It is speculated that Paleolithic ancestors obtained much of their calcium through wild plants which contain 132.6mg/100g vs whole milk 120 mg/100mg. Similarly, paleolithic humans were said to have a diet high in potassium content and lower sodium than modern Americans who may have an imbalance in these electrolytes (Eaton, 2000).

Likewise, micronutrient deficiencies in an athlete’s diet can lead to declines in physical performance. The mean nutrient density of milk and whole grain cereals (common in the American diet) is lower than that of vegetables and fruits, lean meat and shellfish, which are staples of the Paleo diet (Kowalkski & Bujko, 2014).

The Paleo diet, while low in high CHO availability CHO, provide the user with multiple CHO sources and potentially appropriate CHO intake. However, the athlete must be careful to consider the nutrient timing of CHO and the energy availability of the CHO sources.

One of the main staple-holds of paleolithic literature is the fact that it discourages processed foods, and the avoidance of processed foods greatly reduces chemicals, additives, and carcinogens (Challa & Uppaluri, 2019). 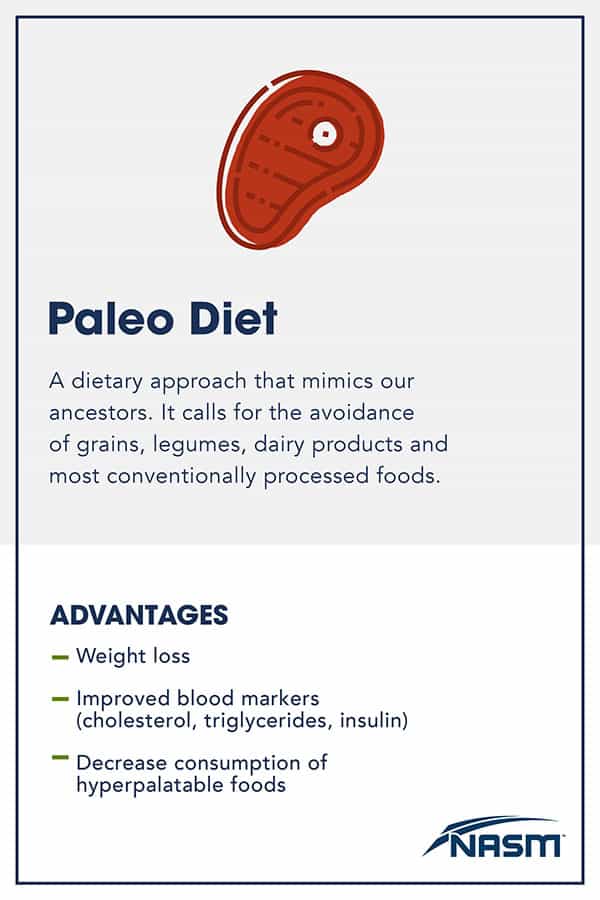 The Paleo Diet can provide a great solution for weight loss and promotion of a whole food rich diet for many of its users. However, based on the prevalence of low CHO availability CHO sources and elimination of high availability CHO foods, it may be a more difficult diet for a strength/power athlete to adhere to while still meeting their high energy demands.

Similarly, despite the elimination of milk proteins from the diet, it is possible to meet PRO needs with lean meat sources encouraged by this diet with careful planning. Equally, the Paleo diet may play a role in a periodized nutrition plan for a strength and power athlete if more strictly adhered to during the off-season and restrictions relaxed during their sport season when CHO are much higher.