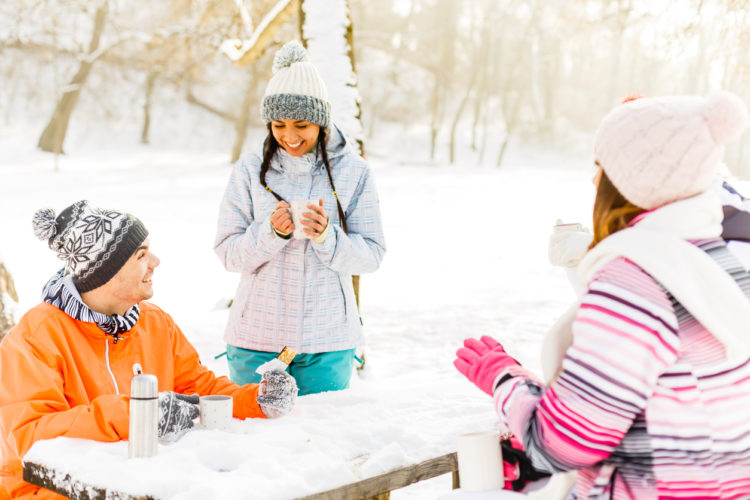 The physiological demands of exercising in the cold are a bit different than that of a more mild climate. The body tries to maintain a temperature of 98.6oF while it’s losing heat and moisture with every breath. Dehydration, hypoglycemia, and hypothermia can all be performance threats when exercising in the cold. See how a few nutritional considerations can keep athletes performing at their coolest peak!

Hydration: Hydration cues can be easy to miss since the colder environment can blunt the thirst sensation (1). In addition to sweating underneath the layers of insulating clothing, water is lost during respiration as the body humidifies the dry cold air. Urine output is also increased (cold diuresis) as blood flow to the extremities is decreased and redirected to the core via vasoconstriction (2). This increased core pressure perceived by the brain results in stimulating the kidneys to extract fluids. Some athletes may even avoid sufficiently hydrating before exercise to avoid the time it takes to make a pit stop and address the extra layers of clothing that may stand in the way of nature’s calling.

Alcohol should be avoided during winter sports participation. Not only can it have a negative impact on performance and judgment, alcohol also has a diuretic effect, and dilates the blood vessels, thus increasing heat loss (3,4).

Rehydration: Rehydrating will be an important part of post-exercise recovery, especially when taking into consideration the fluid lost to sweat, respiration, and increased urine output. Choosing warmer liquids will speed absorption as the body will not need to devote as much time and energy to heating them, and it will be a warm delivery direct to the core. Since chocolate milk has been touted as a superior recovery drink, adjusting to hot chocolate could be an ideal warming alternative after exercising in the cold (3).

Iron: Many winter sports are high altitude activities. Not only is there a higher loss of fluids during respiration at altitude, there is also a higher demand on the oxygen delivering ability of the blood (5,6). During acclimatization to higher elevations there is an increase in red blood cells with a need for adequate iron to support this process (4-6). The more absorbable and bioavailable dietary iron source, heme iron, is found in high-protein animal sources, where as the less bioavailable non-heme iron is found in plant-based and iron-fortified foods (4). The RDAs for men and postmenopausal women are 8 milligrams per day, and 18 milligrams per day for women of childbearing age (4). Iron deficiency can decrease athletic performance and is especially a concern for women who could be more prone to low iron levels and anemia (4,6,).

Energy: In the cold your body is using more energy to stay warm (and if at altitude, working harder to deliver oxygen to the working muscles). When the hypothalamus senses a drop in body temperature, it initiates the involuntary act of shivering-a tensing of muscles with the purpose of generating heat (6). Shivering can increase the body’s heat production five times over resting value (6). Shivering takes a lot of energy and inadequate stores of carbohydrate can lead to hypoglycemia (6). Many winter sports enthusiasts will pack high carbohydrate foods to snack on during activity and competition. Also consider that many winter sports venues have limited access to convenient and healthy food service, especially a long distance activity like cross-country skiing. The few moments it takes to stop to access the snack (i.e., holding ski poles or removing gloves) could help avoid the low energy bonk and decline in performance.