I SIT ALL DAY LONG AND EVERYTHING ACHES: 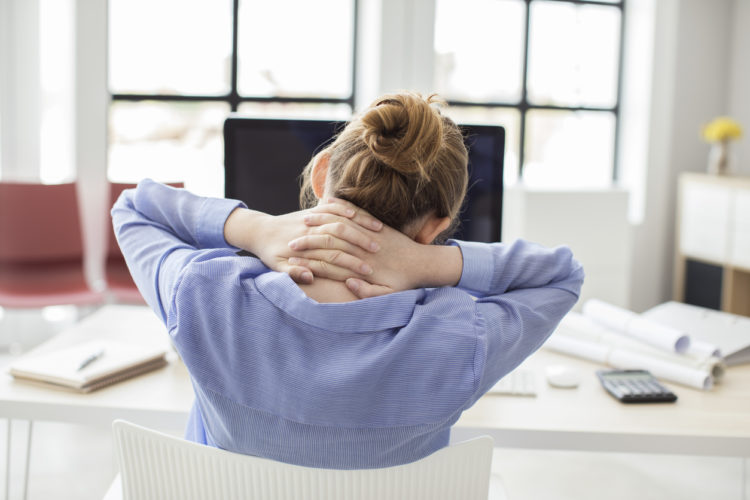 Let’s face it, at one point or another, we’ve all had to sit for extended periods of time, looking at, or working on something in front of us. Whether it was in high school math class, Intro to Athletic Training in our undergraduate program, or our desk-based career in the real world! Sitting for extended periods of time, with the focus in front can cause some changes to our musculoskeletal system, which if left unchecked, will wreak havoc throughout the kinetic chain. Kyphosis in relation to the spine describes a curve that is concave anteriorly and convex posteriorly. Both the thoracic and sacrococcygeal regions display this curve, but it’s in the thoracic spine we commonly see problems arise.

Problems that typically accompany increased kyphosis include forward head posture, rounded shoulders, thoracic back pain, and muscle stiffness in the neck, middle and upper back. If we take a step back from the problem, and investigate what causes it, we’ll first find that the subsystems are effected by sitting with these postures for extended periods of time. The deep longitudinal subsystem includes erector spinae, a muscle that runs the length of the spine. If this muscle becomes lengthened and weak due to the poor posture caused by extended periods of sitting with an increased kyphotic spine, any point along the subsystem can be affected. So now, we not only have pain in the shoulders, neck and upper back – but the potential also exists for low back pain. The erector spinae and psoas form a force couple, so if erector spinae becomes weak – psoas may cease to properly function, in turn possibly becoming chronically tight, and further causing low back pain due to increased shear forces.

Studies have shown that patients with low back pain have altered firing patterns of their stabilizing muscles. The transverse abdominus, or TA, is known to be the first to fire and stabilize in preparation for movement of the trunk or limbs. It’s been further shown that re-teaching local versus global musculature proper firing patterns is beneficial in treating low back pain. If muscles were taken away, and only the spine were to be loaded with weight – it would buckle and break with roughly 20lbs of force applied. This stresses the importance of proper muscle function for spinal stability.

When addressing posture, our main focus should be to restore the length-tension relationships found in the effected muscles. Whether we’re working to move away from an excessively kyphotic thoracic spine or excessively lordotic lumbar spine, the first step should be to activate the local muscle system first, and then proceed to the global, larger, more superficial muscles. Transverse abdominus and multifidus are examples of muscles found within the local muscle system, and these muscles are best activated with very specific exercises.

Starting with the local muscle systems allows us to restore optimal length tension relationships, and altered force couple relationships. We should be careful to address synergistic dominance, and recognize when it is happening. For instance, when the rectus abdominus takes over for the TA. In order for TA to work properly, we must first shut down rectus abdominus and force it not to take on the task. From experience, I’ve found this to be difficult to teach with some, and easier with others. Once taught though, the learning pattern would stay . . . for at least a few days – and then re-teaching would have to take place.

The best way to not end up on the therapist’s table however, is to practice proper posture from the outset. If you know you sit in certain positions for extended periods of time, find the time to move around. Take mini breaks, go for a short walk, or get up and stand while working. Start working out, because even this will lessen the chances of incurring low back pain.(4) To battle kyphosis, make sure your workstation is set up properly, especially when working behind a computer throughout the day.