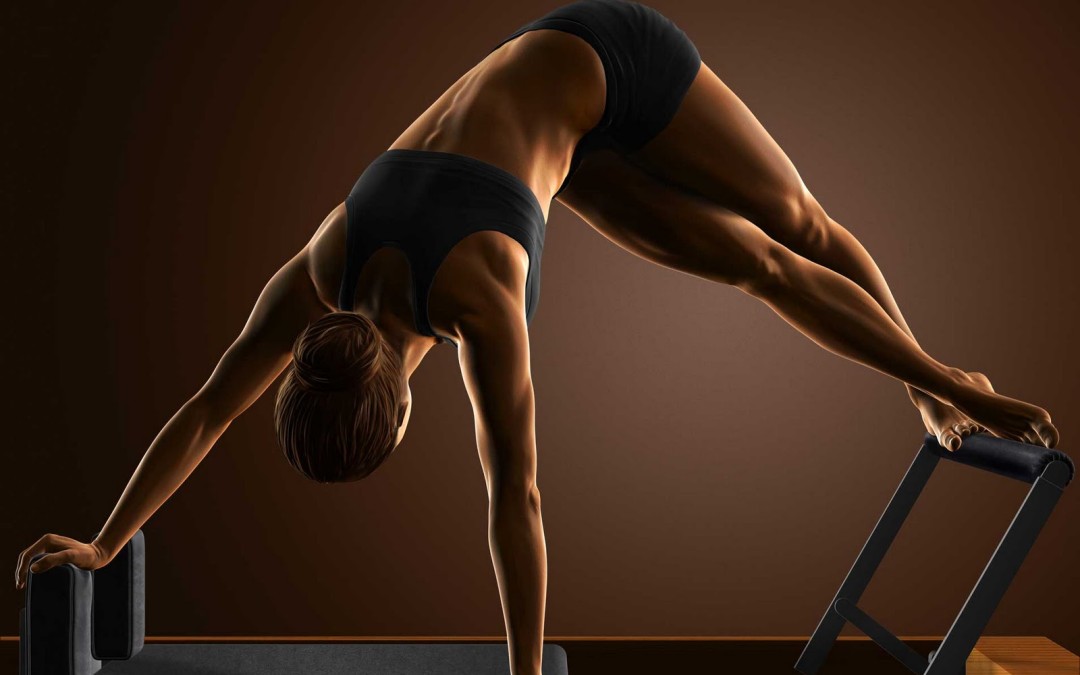 George, a 6’4” social entrepreneur, arrives for his Pilates appointment moving cautiously. His right lower back feels vulnerable as if it ‘might go out at any time’. George’s partner, who comes to sessions several times a week, encouraged George to try Pilates. George schedules his appointments between business trips, averaging twice a month. Airplane seats and long meetings interfere with his mobility. George explains that his lower back felt more secure for several hours following a recent chiropractic adjustment. He does not understand why the adjustment did not hold. George played basketball throughout high school and college. He suffered a severe left ankle lateral inversion sprain in high school. It was left untreated and seems to have contributed to a strategy of left foot supination and lateral tracking of his left knee.

During one session several weeks ago we focused on left lower extremity tracking. George was surprised to discover that as he corrected his ankle alignment his knee felt more secure. I observed George transition from sitting to standing, then watched him walk. It seemed to me that his gait was asymmetrical. As George stepped confidently onto his right foot his pelvis turned to face right and his thorax rotated to face left. In contrast, the stride onto his left foot was shorter, and his thorax did not rotate equally to the right. How, I asked myself, is it possible to facilitate a beneficial change in George’s gait so that his low back feels more stable?

I chose to introduce George to the comprehensive Stability Slings sequences I have developed over the past three years to address proximal contrail of gait. My work with amputees led me to focus on organization of the thoracic spine and the ribs in order to encourage alignment of the thoracolumbar junction with the sacrum in the sagittal, coronal and transverse planes. I emphasize thoracic rotation as the driver of gait, accompanied by oppositional rotation of the pelvis. I developed movement sequences in supine, side lying, prone and quadruped to support thoracic lateral flexion, lateral translation and rotation. These seem to prepare the client to sit and stand with the accurate alignment necessary for efficient gait. The search for partial and full weight bearing options in sitting and standing to complement the non weight bearing sequences led me to use the Balanced Body Stability Sling developed by Marie-Jose Blom in conjunction with the long yellow and purple springs connected to the Spring Board, Reformer Tower, or end of the Trapeze Table.

Stability Sling sequencing
Here is the program I taught George. Please note that George did not practice all possible variations that comprise the comprehensive program. This outline will acquaint you with the general approach to using the Stability Slings to improve the movement relationship of the thoracolumbar junction and the sacrum in order to facilitate proximal control of gait.

George sat on a stack of two 12” rotator discs placed on a box about three feet from the tower end of the reformer tower. I built up the height of the box so that his hip joints would be above his knee joints and he could sit upright in a neutral pelvis and neutral spine. One Stability Sling attached to two long yellow springs was placed at the level of his TL junction. The Sling snuggled around the sides and back of his rib cage.

I instructed George to draw his lower from ribs toward the sling, bringing his TL Junction into sagittal alignment with his sacrum. The first motion was side bending, or lateral flexion to the right, then to the left. In lateral flexion to the right, listen to the ground with the right ear. Then listen to the ground with the left ear, keeping both ischium firmly anchored on the disc. The second motion is lateral translation of the thorax with respect to the pelvis. Anchoring the left ischium into the disc, shift the ribs to the right. Anchor the right ischium into the disc and shift the ribs to the left. After lateral flexion and lateral translation comes rotation.

Maintaining the central axis, rotate the disc so that the pelvis, thorax, shoulders, neck, head and eyes simultaneously turn to the right. Turn everything in the same direction at the same time while keeping the knees and feet aimed straight ahead. George noted that he was turning more to the left than to the right. I suggested that he press his left foot strongly into the floor, creating a ground force with his left foot while pressing his right sitting bone into the disc and steering the rotator disc to the right.

After about thirty rotations right and left I told George to keep his head facing forward while continuing to rotate his pelvis, thorax and shoulders with the disc. Next, he was to turn his head opposite the direction of the disc. The fourth variation involved rotating the disc and pelvis to the right, turning the thoracic spine and ribs to the left and keeping the head, neck and eyes straight ahead (and vice versa).

This last variation gives an opportunity to practice the oppositional rotation of the thorax and the pelvis necessary for efficient gait. George was lost in space when he tried to rotate his pelvis to the left and his thorax to the right. This was the less familiar diagonal based on his left ankle injury and left knee tracking dysfunction. I reinforced his explorations with touch cues to clarify the unfamiliar rotation coordination and encouraging accurate alignment of the TL junction with the sacrum.

Following this first group of variations I removed the Stability Sling. George walked around the studio. He was amazed at how light he felt, as if his rib cage was suspended from sky hooks, carrying him around the room. I am always pleased with this somatic hallucination but no longer surprised by it, as so many clients express a similar positive response. The image that I suggest to the clients is that the lungs cradling the heart within the ribs are like a hot air balloon that is carried along on currents of air. The pelvis is the basket that is suspended from the hot air balloon. The grounding cords that connect the basket to the ground are the tissues of the Deep Front Line Myofascial Meridian.

Elizabeth Larkam, PMA®-CPT, has been teaching Pilates since 1985 following her Pilates education from the first generation teachers. She was awarded the Medal of the Danish Society of Military Medicine in recognition of her efforts to improve the rehabilitation of wounded soldiers. The PMA’s Heroes in Motion initiative was inspired by Elizabeth’s work with clients experiencing severe impediments to motor control. She is a member of the Balanced Body Faculty and a Passing the Torch mentor.

This myofascial continuity described by Thomas Myers in Anatomy Trains connects the lungs and heart to the diaphragm, to the crura of the diaphragm along the front of the spine, to the psoas, the quadratum lumborum, the illiacus the adductors and eventually to the soles of the feet.

George repeated the same sequence, this time with two Stability Slings. One (as before) is at the Thoracolumbar junction. The second is placed at the sacrum and connected to the Reformer Tower with two purple springs. As George moves he is receiving more proprioceptive feedback both at the TL junction and at the sacrum, reinforcing accurate alignment of these areas in all three planes. His hands hold handles that are connected to two short yellow springs also attached to the tower. The movement of his arms follows and reinforces the rotation of the thoracic spine.

Following a walking intermission George begins his third section of practice. This time he is seated on a stack of two rotator discs placed on top of a Chair with a split pedal. George places the front of his heels in contact with the Chair pedals. Wearing two Stability Slings he practices all the movements mentioned above. In addition he coordinates the movements of his legs and arms. As his pelvis turns to the right he presses the pedal down with his left foot. As he turns his pelvis to the left he presses down with his right foot.

Standing sequences
After another walking intermission it is finally time to stand wearing the Stability Slings on the TL junction and the sacrum with the long yellow and purple springs attached to the eyebolts on the tower. George practices the sequences in standing: lateral flexion, lateral translation, undifferentiated rotation and differentiated rotation. I add weight shifts right and left, standing on the right leg as he shifts to the right and balancing on the left leg as he shifts to the left. In addition George stands with his left side toward that tower so that he can practice shifting to the right and balancing on his right foot.

He also practices this on the other side, balancing on his more difficult side. Throughout each of these movements the Stability Slings are stimulating the area around the TL junction and the sacrum, amplifying the proprioception in these areas and bringing awareness to the accurate alignment of these bony landmarks in standing balance and in movement.

A very improved gait
Finally, George is released from the Stability Slings and practices his improved gait, marveling at how effortless it is to walk now, as if his thorax is buoyant, connecting to the sky while his pelvis is suspended from his thorax and his legs swing freely from the level of his diaphragm. George reports that his lower back feels less vulnerable.

In addition to the sequences described above I also use the Stability Slings in conjunction with sitting on a large fit ball, further differentiating the movements of the thorax and the pelvis. I also encourage movements of the thorax and the pelvis on diagonals, in semi circles, full circles, and figure eights on all axes. Each of us has kinesthetic blind spots that have developed from activities of daily living, habitual movement practices, injury or trauma. Systematic exploration of the kinesphere with the proprioceptive feedback from the Stability Slings refines proximal motor control that is beneficial for activities of daily living and all forms of movement.

I will teach the first full course on Stability Slings and Proximal Control of Gait in Hong Kong on October 27, 2013. A second course will be held in Tokyo February 18, 2014. Filming of the material is planed by FusionFitness in December 2013 and Pilates Anytime in January 2014.