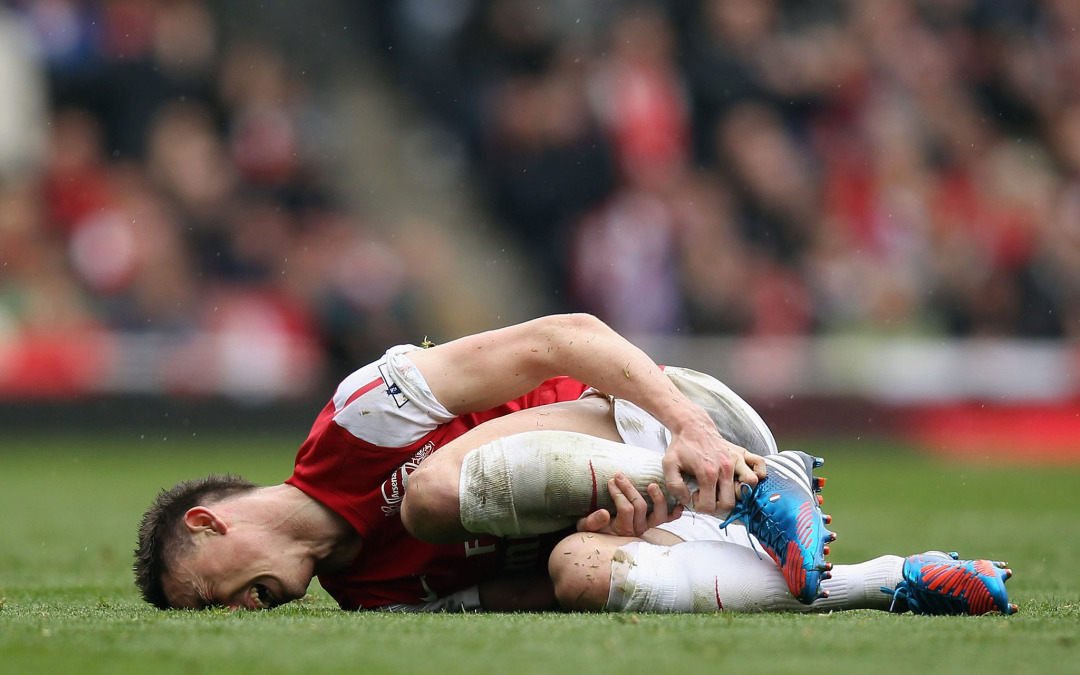 Soccer is a sport that requires a large demand from the lower body in all planes of motions. It includes many repetitive actions such as kicking, sprinting and changing of direction. The large stress placed on the lower body, along with the repetition and rotational aspect of the sport, makes lower body injuries very common among soccer athletes.

Not only do female soccer athletes experience the predisposition for lower body injuries due to the sport itself, but they also carry a unique risk due to their gender. Those females who participate in sports that require a high number of deceleration, twisting, cutting, and jumping movements, such as soccer, are twice as likely to sustain a lower body injury than their male counter parts. This can be due to a number of factors including anatomy, knee alignment, hormonal profile, and muscle strength. In fact, 88% of all injuries sustained in soccer involve the lower body. The most common of these injuries are ACL tear/strain, ankle sprain, hamstring/groin strain, and iliotibial band syndrome.

Along with a sound strength and conditioning program, several prehabilitation and recovery exercises can be used to aide in the prevention of lower body injuries that are common among female soccer athletes. Myofascial Compression™ Techniques (MCT), as developed by TriggerPoint Performance Therapy™, have several key benefits to supplement an athlete’s training regime. The first is biomechanical, including the treatment of tissue adhesions and increased joint and limb range of motion. Physiological benefits include increased muscle and skin blood flow and circulation, increase of relaxation hormones and decrease of stress hormones. Neurological effects include a reflex stimulation that decreases neuromuscular excitability, pain and muscle tension or spasm. All of these can be beneficial in decreasing the risk of lower body injuries for female soccer players.

The following movements can be used two to three times a week to help improve lower body soft tissue quality, range of motion and release of tension created by the repetitive motions found in the sport of soccer.

Why: The gastrocnemius muscle, or calf, originates at the knee joint and is mainly responsible for plantar flexion (pointing the toe) when the knee is extended. This muscle is highly stressed in soccer players because of the large requirement of running and changing direction. It is especially important in protecting the ankle and knee joints to include soft tissue work for the muscles that are highly stressed and attach at these joints.

How To: Place the TP Massage Ball on the center of the Baller Block. Sitting on the ground with your hands behind you, keep the leg straight and position the TP Massage Ball under the middle of the calf muscle, placing the opposite foot right above the ball to increase compression. You will perform three passes of the following exercises, the first with the ball in the middle of the calf, the second with the leg slightly internally rotated and the third with slight external rotation. Perform four foot slaps (point and flex toe), two foot circles right and two foot circles left.

Why: The IT band is essentially a thick band of fascia running on the side of the leg from the knee to the pelvis. In athletes whose sport requires a large amount of running, this area becomes highly stressed and ultimately tight. As mentioned with the calf, it is important to take care of this area because of its connection with both the lateral knee and the hip. Additionally, IT band syndrome is a common overuse injury reported among soccer players.

How To: Lying on your side, supporting your weight with your elbow, stack both legs on top of each other. Place the GRID in the center part of your bottom leg, just above the knee. You will perform two sets of the following movements, the first directly on the center of the IT band and the second with the body slightly shifted forward with the GRID towards the front of the thigh, but not all the way to the quadriceps. For both sets, divide the area into two zones; Zone 1-4 from the knee to halfway up the leg, and Zone 2 from the half way point to the hip. Perform four forward and back rolls in each zone, and 4 knee bends.

Why: The adductor muscle group is very important for the muscle actions required in soccer, primarily the kicking motion, which puts this area at a high risk for injuries. The adductors are composed of several muscles located on the inside of the thigh running from the hip to the knee joint. These muscles are primarily responsible for adducting the thigh (bringing it inward towards the body), internal rotation, as well as aiding in hip flexion.

How To: Lying on your stomach, supporting your weight with your elbows, bend the knee of the working leg and bring it up to your side. Place the GRID or QuadBaller above the knee, parallel to the lower leg. Press hips into the ground to add compression. The non-working leg is extended and stays relaxed during the process. Divide this area again into two zones, and perform four 1 inch rolls forward and back through each zone, followed by four knee bends. Repeat on the other leg.

Why: The hip flexors are several muscles primarily consisting of the psoas, illiacus and rectus femoris. These muscles are used repetitively in soccer as they are responsible for raising the knee during the kick preparation and the knee drive during any running action. Given the high requirement of these muscles during soccer movements, it is no wonder they become very tight. Providing soft tissue work to these muscles can be beneficial to the female soccer by creating better hip mobility and allowing better strengthening of the hip joint.

How To: Lying on your stomach, supporting your weight with your elbows, place the GRID or QuadBaller underneath one leg between the top of the iliac crest (pelvis bone) and the top of the thigh. Begin by rolling forward and backwards four times and then rotate the leg side to side four times to create cross friction, repeat sequence three times. Perform the first set with the toe pointed into the ground, the second with the thigh internally rotated (toe turned in) and the third with the thigh externally rotated (toe turned out).

Why: The piriformis muscle is located under the gluteal muscles and is highly used in soccer as it externally rotates, abducts and stabilizes the hip joint. This area is often irritated, and if released can aide in relieving other lower body issues as it has close proximity to the sciatic nerve. During a soccer kick, the piriformis helps to move the bent knee away from the body. Additionally, it stabilizes the hip during rotation and changes of direction.

How To: Begin by sitting down with one leg extended and the other bent towards your chest. Place the TP Massage Ball as if you were placing it in your back pocket on the same side the leg is extended. Start by raising the straight leg off the ground then bringing the knee towards the chest and extending it back out straight. Repeat four times. Next, bend the knees placing both feet on the ground opening the outside knee away from the body twice then closing inwards twice. Lastly, perform two pivots on the ball in each direction with the knees still bent. Repeat this entire sequence twice.

When added to a solid strength and conditioning program that focuses on deceleration technique and hip external rotator strength, these myofascial release techniques can be beneficial for lower body injury prevention in female soccer players. Due to the high incidence of injuries in this population, extra preventive measures should be taken to counter act this disadvantage.