King Of The Beasts 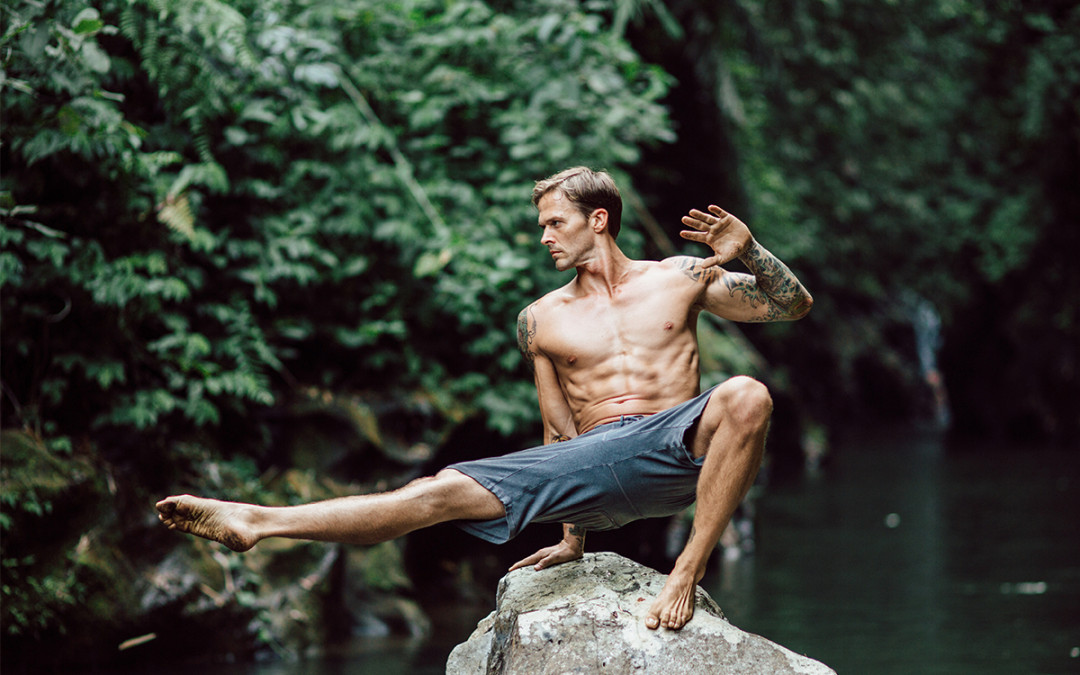 Mike Fitch, creator of the Animal Flow® Workout, shares how his innovative programming can bring out the primal grace in your clients.

Touting the tag lines “Train Like A Real Beast” and “Train To Be Super,” Animal Flow is rearing a new breed of athlete. The hybrid program fuses elements of body-weight training, skill-based disciplines (such as gymnastics and break dancing), quadrupedal (hands and feet on the floor) actions and ground-based movements that mimic animal locomotion. Animal Flow is designed to naturally challenge participants to gain strength by fighting gravity instead of lifting heavy weights. Tailored to all fitness levels, Fitch’s unique, equipment-free program promises to increase mobility, flexibility, stability, power, endurance, skill and neuromuscular communication.

Introduced in 2010, the program now boasts more than 2,000 Certified Animal Flow Instructors and 12 master instructors in more than 20 different countries. American Fitness caught up with the dynamo in between workshop certification travels that include Costa Rica, the United Kingdom, Dublin, Amsterdam, New Zealand, Indonesia, Australia, Spain and the United States. “We’ve gained an enormous amount of traction in a relatively short time, but our timing’s on point,” says Fitch. “Following the industry’s phase of core and corrective exercises, fitness enthusiasts were ready for challenges out of the norm. With the help of my business partner, Karen Maher, Animal Flow has grown on a grassroots and organic level with momentum and pride. We’ve gathered a team of rock star instructors that people want to connect with. We’re not a fad. We have legs and longevity. And the best part: Animal Flow is a solid, intuitive learning process that’s super visual and fun.” But to truly understand the beauty of this workout beast, let’s begin at its beginning.

Fitch, an avid athlete, was drawn to the fitness industry shortly after high school graduation. He had moved from Kentucky to Los Angeles, where he hired “an amazing personal trainer,” who was so influential that Fitch thought, “I want to do what you do.”

“Exposed to the best minds in the industry, I became obsessed with seeking the finest coaches, training styles, modalities and philosophies,” says Fitch. “I studied Olympic lifts; kettlebell training; sports-specific and speed agility training; and corrective exercise for pre- and post-rehab exercise clients.” Never one to rest on his haunches, Fitch pushed onward, increasing his studies and sharing what he learned with others. “My education was self-study and hands-on,” he says. “I became an educator, teaching anatomy, physiology, biomechanics and program design as a Master Trainer for the Equinox Fitness Training Institute.”

For years, Fitch diligently employed traditional exercise programming to his clients and himself. His personal workouts, which focused on building muscle mass, were impressive. He gained 50 pounds by lifting considerable amounts of weight, but noted a cost to his health and well-being. “I’d wake up thinking, ‘Wow I’m too young to feel this old,’” he says. “Although I was ‘training to last’—that is, training today to be the person I want to be in 20 years—I felt beat up, rundown.” His joints hurt, and in spite of his level of fitness, his body didn’t move the way he wanted it to. “It just didn’t jibe,” he says. “So I put down the dumbbells and entered the world of body-weight training.”

“When we move like animals, we can improve the transfer of energy and the cognition of the human animal.”

Fitch immersed himself in the study of nontraditional exercise modalities. “I studied gymnastics, parkour, hand-balancing, circus arts, strength training and break dancing,” he says. The experience was indeed humbling. Fitch realized that his focus on building strength had left him with little ability to put his body through various movement sequences. “Study became a journey of self-mastery to strategically build a functional, symmetrical and aesthetic physique with the tools I already had,” he says.

Empowered by his new mission, Fitch searched for answers “not found in toys or machines but in skill sets.” He instead performed “feats of balance and strength”—handstands, pushups, muscle-ups, the human flag—which intrigued and reshaped him both physically and mentally. “Body-weight training allowed me to achieve what weight-training never did,” he asserts. Inspired, Fitch founded his company Global Bodyweight Training (GBT) which enabled him to further apply his accumulated knowledge of fitness and fitness management.

“As a fitness professional, personal trainer and educator, I created individualized programs that integrated fitness, nutrition and lifestyle coaching,” Fitch explains. “I developed multiple programs that celebrated movement, embracing the philosophy that with practice and proper progression, everyone can excel at body-weight training.” Fitch continued to improve and evolve, and he soon created the Animal Flow movement company within his already successful GBT business.

The Beauty of the Beast

This is not an entirely new concept: Animal locomotive patterns are common themes among many fitness modalities. “Building on my knowledge of anatomy and biomechanics, I spent hours and hours and hours on the floor testing ways to merge fitness modalities and disciplines to develop a sensible, structured, applicable and teachable program of quadrupedal crawling patterns that could improve the function of the human animal,” Fitch says. “Animal Flow enables the body to translate energy with movements that connect to the ground and the reactive forces that go back into the body. Movements coordinate and create strategies not found in a gym scenario.”

In short, Animal Flow underscores the idea that when we move like animals, we can improve the communication, the transfer of energy and the cognition of the human animal.

To fully understand Animal Flow, it’s helpful to break it down into its most basic elements. Animal is just one component of Animal Flow. But in that one intriguing component, participants mimic animal movements to include an ape, a beast, a crab and a baboon, for example. “Animal movements are a fun and productive way of saying, ‘Place your hands and feet on the floor and move in cool sequences not normally experienced on a daily basis,’” says Fitch.

Flow threads each modality of Animal Flow together by creating a seamless transfer of energy so that movements can be performed one after the other. “Animal traveling forms” link together as a continuous “flow” of switches and transitions at a slow or moderate speed. Switches and transitions can also be used as stand-alone drills. (See “6 Ways to Go With the Flow below” for more details on flow and switches.)

Additional human modalities such as break dancing also play into Animal Flow. According to Fitch, break dancing is a great example of energy transfer, dissipation and redirection from ground contact, which embodies the very essence of Animal Flow. “Break dancers perform feats that ‘break’ the laws of gravity and physics and execute seemingly impossible movements by using force—the transfer of energy—efficiently and effectively,” he says. Participants will also recognize other modalities in common Animal Flow moves: hand-balancing in static frogs, gymnastics in rolling patterns, parkour in traveling apes, and yoga movements in scorpion reaches.

Animal Flow serves as an “adhesive bridge among athletic modalities,” says Fitch. “High-intensity weight-lifting programs can benefit from Animal Flow movements to increase flexibility, mobility and stability, while flexible yogis will benefit from tapping into more power, speed and fluidity as they move outside of yoga’s strict plane of motion.”

“Movement is powerful and innate. There’s really something god-like about the way we move.”

These are simple wrist exercises designed to increase wrist flexibility and strength. Wrist health is described as the ability to adapt to consistent challenge. The “wrist-relief” position is noted as the go-to position between movements. Wrist mobilization exercises are suggested prior to and following each session.

By “setting the system,” activations gather information, assess body stabilization, correct exercise strategy and serve as an antagonist movement to a resisted push or pull. Activations complement and link with the chains and slings of movement. Activations are also noted as a go-to tool for shoulder, spine and hip stabilization, as well as pre/post rehab and active rest.

These are full-body movements that explore range of motion, including flexion, extension, and internal and external rotation. Noted as an animal foundation, each of the Form Specific Stretches begin as an animal form. Stretches or “reaches” must be executed slowly and with control. End points can become an isometric/static movement for postural realignment and/or joint balancing, or they can be moved or released in multiple repetitions as active/dynamic movements for flexibility and conditioning.

Exercises that mimic animal movements—ape, beast, crab—are utilized for warm-up, body conditioning and active rest. Traveling Forms can be performed in opposing patterns—multiple planes of motion and direction—to sustain balance and reduce the potential for injury due to pattern overload. Traveling Forms are noted as tools to enhance communication between the shoulders and hips.

A combination of the entire program, Flows are various moves connected in a fluid sequence. Flows can be designed as choreographed sequences or performed as a callout routine. Conducted at random, callouts require skilled focus and reaction time.

Mike Fitch is offering intensive 2-day workshops in North America, Europe, Australia and Asia, providing fitness professionals with the opportunity to become certified as an Animal Flow Level 2 Instructor. The course will earn you continuing education credits: 0.7 CEUs from NASM, in particular. Learn more on www.animalflow.com.

Animal Flow is a fun and interesting programming twist that can be integrated into everything fitness. Sequences can be maximized as a full-length group exercise class or integrated within small group training programs, boot camps, team and personal training sessions, as well as mixed martial arts.

The universal language of Animal Flow unites people of diverse backgrounds. “Directional words (right and left) and limb cues change to coincide with native languages, but movement words stay the same. Everyone speaks the same language to draw upon a cohesive opportunity of making Animal Flow friends globally.”

The ever-increasing worldwide cache of Animal Flow instructors remains a testament to the program’s global appeal. Not surprisingly, Fitch has even bigger aspirations for Animal Flow as a well-known fitness modality used in every fitness regimen including CrossFit, physical therapy, personal training and group exercise programming. “Animal Flow places students in an environment that allows them to learn how to navigate their body, which carries over to their experience of navigating their world,” he adds.

Fitch also encourages students and instructors to use Animal Flow as a practice, not just a workout. “Like martial arts and yoga, Animal Flow requires repetition to perform movements fluidly and efficiently,” he says. “And as in any repetitive practice, students can experience movement on a deeper, spiritual level. Movement is powerful and innate. There’s really something god-like about the way we move. Animal Flow can be used as a vessel to reach into our psyche…and higher level of consciousness.”

6 Ways to Go With the Flow

Animal Flow® is a great addition to every fitness professional’s arsenal of movement tools. Exercises are grouped into the six components listed below. Moves can be isolated or used in countless combinations within any exercise format, with each component eliciting specific unique results as explained below by the program’s creator, Mike Fitch. AF